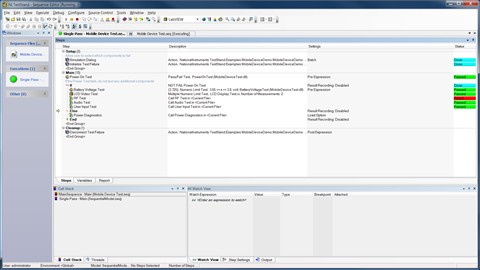 TestStand can call test code written in virtually any programming environment or language, including LabVIEW, LabVIEW NXG, LabWindows™/CVI, C/C++, and .NET and even scripting languages. However, most general-purpose programming languages are not optimized for test and measurement applications, making it difficult to write code to communicate with instruments, analyze data, and display that data in a meaningful format to engineers.

LabVIEW NXG simplifies the hardware integration for engineering applications, so you can rapidly acquire and visualize data sets from virtually any I/O device, whether by NI or a third party, using a consistent approach. Combined with a graphical programming syntax that reduces the time to visualize, create, and code engineering systems, LabVIEW, with a community of hundreds of thousands of developers, helps both programmers and non-programmers develop powerful test software.

In the Figure 3 example, a LabVIEW NXG VI (virtual instrument or program) acquires a signal from two instruments, analyzes the data, and then reports the result back to the user.

Figure 3.Graphical Programming in the LabVIEW NXG Environment, Optimized for Test and Measurement