Creates a channel that uses a linear encoder to measure linear position. With the exception of devices that support multi-counter tasks, you can create only one counter input channel at a time with this node, because a task can contain only one counter input channel. To read from multiple counters simultaneously, use a separate task for each counter. Connect the input signals to the default input terminals of the counter, unless you select different input terminals. 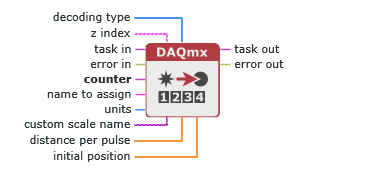 counter specifies the name of the counter to use to create the virtual channel. The DAQmx physical channel constant lists all physical channels, including counters, for devices installed in the system.

units specifies the units to use to return linear position measurements from the channel.

z index specifies the Z indexing settings for the channel.

z index enable specifies whether to use Z indexing for the channel.

z index value specifies in units the value to which to reset the measurement, when signal Z is high, and signal A and signal B are at the states you specify with z index phase.

When signal Z transitions to high, and how long it stays high, varies from encoder to encoder. Refer to the documentation for the encoder to determine the timing of signal Z with respect to signal A and signal B.

distance per pulse is the distance to measure for each pulse the encoder generates on signal A or signal B. This value is in the units you specify with the units input.

initial position is the position of the encoder when you begin the measurement. This value is in the units you specify with the units input.

decoding type specifies how to count and interpret the pulses the encoder generates on signal A and signal B. X1, X2, and X4 are valid for quadrature encoders only. Two Pulse Counting is valid only for two-pulse encoders.