With NI-DAQmx 7.4 and later, professional developers can now programmatically create and save tasks, global channels, and scales. The programmatically saved objects appear in MAX and are available for use in DAQ Assistant and all your applications. This provides the developer with a second option for deployment of configuration information. This new option does not require the developer to import task, channel, and scale configurations using the MAX Import Wizard.

To programmatically save tasks and channels use the DAQmx storage functions located on the function palette under Measurement I/O->DAQmx->DAQmx Advanced-> System Setup->Storage as shown in Figure 1. 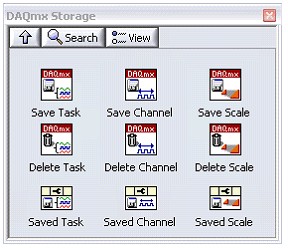 The ability to programmatically save tasks, channels, and scales helps professional developers to simplify system configuration and deployment to multiple locations, as well as reduces the chance for error and need for debugging.

Figure 2 shows a LabVIEW example that programmatically saves an analog input task. Refer to NI-DAQmx Help to learn more about this professional tool:

Figure 2. Developers can use NI-DAQmx to programmatically create and save tasks, channels, and scales