Role of a Test Executive

A test executive is the high-level software application for organizing, deploying, executing, and reporting on automated tests. Test executives typically have two modes of operation:

In most cases, the actual test programs that control the instrumentation hardware are separate software modules written in either a test programming language, such as LabVIEW or NI LabWindows™/CVI, or a general-purpose programming language, such as C/C++, scripting languages, or .NET. By following a modular software architecture that decouples the test code modules, which are often specific to the device being tested, from the test execution system, which is common to all the different devices being tested, you have a scalable and flexible architecture that is less expensive to develop, support, and maintain in the long term.

For more information on a modular software architecture, refer to:
Developing a Modular Test Software Architecture With NI TestStand and LabVIEW.

The following list outlines some of the common functionality that test executives accomplish:

Many developers undertake the task of building their own test executives before they fully realize the magnitude of the task. The following section outlines some of the specific costs incurred by developing and maintaining a test executive as well as training employees to use the test executive.

For a comparison, the costs are contrasted with the analogous cost incurred by choosing a COTS test executive. For the purpose of this cost breakdown, we have picked NI TestStand as the COTS solution because it is a ready-to-run test executive, but still allows for full customizability for your specific test applications

Note: The costs and man-hours used in this comparison are estimates based on our experience working with hundreds of automated test customers, however, they are just estimates of a common case. The important points here are the identification of the multitude of tasks required, and the significance of the investment required to complete these tasks.

When evaluating the cost of developing custom software, it is important to realize all of the costs associated with an engineer. For instance, even though the cost of an engineer may be calculated by the hour or day, it is rare that this includes intangibles, such as benefits, healthcare, and pension, or the cost of office tools such as a computer, a desk, and office space. When all of these aspects are included, the average cost of a capable software engineer can easily reach $150,000 USD per year. However, in the analysis that follows, we will assume that, in USD, the cost of an engineer is $100,000 per year, or roughly $400 per working day.

Developing your test management solution is only the beginning of the task. Software is not a one-time cost, but an ongoing effort. Software must be maintained over time in order to:

Many times, this maintenance effort can become a major undertaking and consume months of development time. For instance, when new operating systems are released, simply porting the same application to a new OS can be a monumental task. Custom-developed software must be updated and maintained by the end-user or third-party developer on a contract basis and can be very expensive.

On the other hand, ready-to-run COTS test executive packages such as NI TestStand are updated by the vendor regularly, simply to stay competitive and viable. This policy enables users to take advantage of the latest technologies (and get fixes to bugs and new functionality) at a fraction of the cost.

Again, associating a definitive cost on maintenance and support is impossible because every case is different. However, in this example, we assume that the overhead of maintaining an in-house test executive requires the effort of 15 percent of the test development department (with these engineers often being called Test Executive Architects), and that the cost of maintaining the software increases by five percent every year. On the other hand, the overhead for NI TestStand would be substantially lower, at around five percent of the department, because fewer customizations are needed. Test Architects are still needed and we also included the cost associated with upgrading to a newer version of NI TestStand.

Keeping our earlier assumptions, and a test system lifetime of 10 years, we can develop the following cost analysis:

Savings in first year by buying a COTS Test Executive: $21,410

When standardizing on a standard test package, a company must provide detailed training to the appropriate users. For test developers to be productive at creating test code using a test executive, they must first be trained on how to use the test executive. In addition to basic training, developers can also greatly benefit from learning best practices and working through example problems.

Unfortunately, training is a major expense that many companies overlook when deciding on a software platform. When developing a custom test executive, keep in mind that in addition to developing the software, you will also have to provide standard training classes as well as local experts who can deliver the training material.

Many COTS software, including NI TestStand, offer on-site (as well as online) employee training that ranges from basic introductory topics, such as how to develop and deploy tests, to more advanced topics, like customizing the test executive and creating operator interfaces. In addition, these courses are taught in most major languages.

Although the actual cost of training varies between organizations, we can see the cost of developing and delivering training by making some assumptions. In this example, we continue with the assumptions from earlier.

Note: Although the savings in the training cost is dwarfed by savings in other categories, such as development and maintenance, keep in mind that 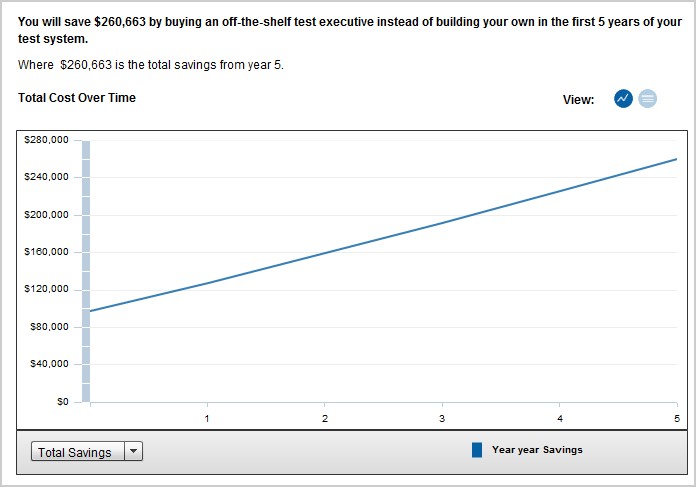 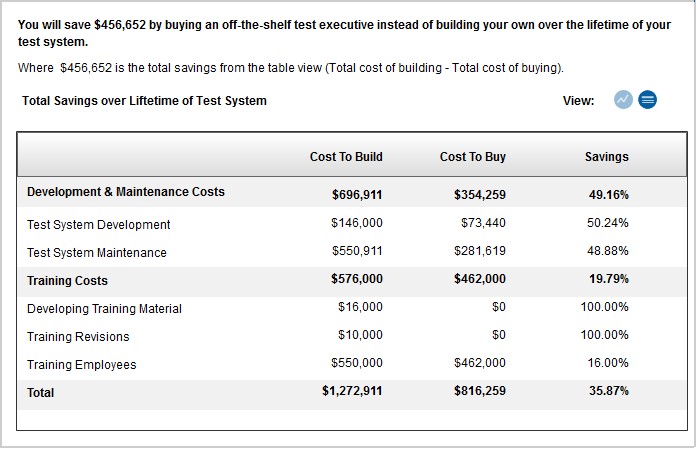 There are inherent trade-offs in deciding whether to build a custom test executive or buy a commercial off the shelf solution. A COTS test executive has the potential to reduce cost by taking away a lot of the development, maintenance, and training burden. However, every test application is different, and it is critical to evaluate whether the built-in functionality can adequately meet the wide variety of testing requirements for your specific application.

NI TestStand is a ready-to-run test executive that is fully customizable for any test application that is designed to deliver the cost benefits of a purchased product while maintaining the flexibility of a custom-developed solution. This customizability is made possible through a very modular software architecture that exposes all the functionality of the underlying execution engine via an easy-to-use API.