One of the primary advantages of an FPGA is the ability to load different hardware personalities based upon the needs of specific applications.  However as a consequence of the FPGA’s flexible nature, it is important to ensure that the correct practices are used for tasks such as development, stand-alone deployment and maintenance. This article will address best-practices for each of these phases in the development lifecycle.

A LabVIEW FPGA application is developed in a VI that is targeted for a specific National Instruments’ FPGA device. The FPGA VI in turn goes through a compilation process that eventually generates a bit file, which when downloaded to the FPGA configures it to function as specified in the VI. If an FPGA is modified it must be recompiled which overwrites the bit file that is stored on the development machine. As a result, it is important that a versioning system is in place to account for both the FPGA VI as well as the bit file.

Since the FPGA VI is where the application is programmed it is often incorporated in a source code control system. Although the bit file cannot be opened to reference the logic of the application it should also be included in a versioning system because it provides a compiled static file that can be referenced back to throughout the software development process.

If bit file versioning is implemented the bit file should be renamed to a meaningful value before it is submitted to source code control for ease of reference. By default the bit file is located in a folder called “FPGA Bitfiles” at the same level as the FPGA VI. In order to verify the location of the bit file navigate in the  LabVIEW Project Explorer window to the FPGA VI, right-click on it and select “Target-specific Properties…”

The way in which an FPGA application is referenced in a host application will depend on the versioning that is implemented in a system. In order to reference a specific FPGA VI version, it will need to be checked out of source code control and then the host VI’s “Open FPGA Reference” function will need to be updated to point to the VI as shown in Figure 1. If the bit file is referenced for versioning the “Open FPGA Reference” then should be updated to point to it rather than the FPGA VI. 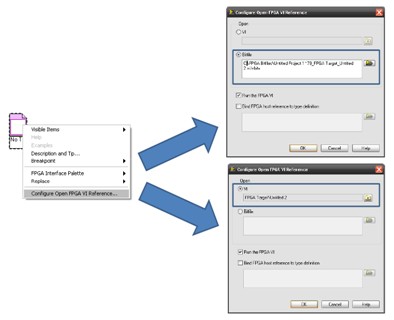 Figure 1: The Open FPGA VI Reference can be configured either to reference the bit file or the FPGA VI.

In the course of developing an FPGA VI the program logic must often be tested to validate its operation. Using the interactive front panel communication method, in which the run button is asserted for an FPGA VI in the development environment, is one way to test the operation of the application. However, this process involves a complex compilation process to convert the LabVIEW FPGA VI to a bit file and then deploy it to the target which may take anywhere from a few minutes to multiple hours. In addition, it requires that the developer has the target device available to deploy the FPGA application.

As an alternative to recompiling and deploying a new application for each test, the LabVIEW FPGA module includes an FPGA simulation environment in which the application can be run on the development machine. This allows the validation of the overall application logic before the time intensive compilation process is undertaken. Furthermore since it runs on the development machine the actual hardware is not required to run an FPGA simulation. To find out more information on simulating an FPGA target in LabVIEW reference the Efficient Development and Debugging with LabVIEW FPGA Developer Zone article.

It is important to note that interactive front panel communication should only be used for the development phase of an FPGA application as the configuration on the FPGA is volatile. When the bit file is downloaded to the FPGA it will be lost if the device is power cycled, therefore another method is required for stand-alone deployments.

Once the development phase of the FPGA application is complete the generated bit file, also referred to as a personality, needs to be deployed to the system. The way in which the file is deployed will depend on whether the FPGA is independent or dependent on a host VI. If the FPGA VI does require communication or data logging then the development of a host VI is required. However if the FPGA runs independently of any other target then the personality should be stored in non-volatile flash memory on the FPGA target. The relationship between these two deployment methodologies and where the FPGA personality is then stored for a compactRIO is displayed in Figure 2. 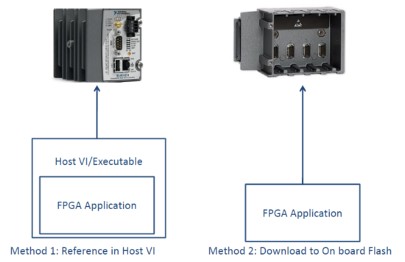 If the personality is embedded in to the host application the personality will be transferred with the executable. As a result, if many of these systems need to be deployed the Real-Time Target System Replication or the Windows based installer can be utilized to automate the deployment process.

Often times a deployed target’s image will need to be updated with a modified version of the personality. This redeployment process can be accomplished identically to the initial deployment by overwriting the files on the target; however, environment variables such as deployed location may impede this deployment procedure. Both the RIO Device Setup application and FTP applications are setup to address this transfer of files across a network.

If there is no network available at the remote location and the FPGA personality is embedded in the host VI, a technician’s machine only needs FTP capabilities to transfer the update to the host. If the personality is stored on the FPGA on board flash, the machine at the remote location will require that the NI-RIO driver is installed in order to utilize the RIO Device Setup application.

The flexibility of an FPGA’s personality makes it a very powerful tool. However, in order to fully utilize the device’s capabilities it is important to manage the FPGA files appropriately on the development machine and properly identify the correct deployment methodology in each phase of the development life cycle.