An I/O server is a Shared Variable Engine (SVE) Plug-in that enables communication with devices and applications that do not use National Instruments proprietary NI Publish-Subscribe Protocol (NI-PSP) utilized by Shared Variables. I/O servers are the bridging elements between shared variables in a LabVIEW VI and data tags in OPC, Modbus, or EPICS. I/O servers plug into the SVE to provide a list of items available for subscription and to provide that data to the SVE. With the LabVIEW Datalogging and Supervisory Control (DSC) Module, you can create in LabVIEW I/O servers to communicate with OPC, Modbus, and EPICS clients. This document will cover these three types of I/O Servers.

OPC Client I/O Servers allow for the Shared Variable Engine to bind the OPC tags from an OPC Server to Shared Variables. These bound Shared Variables provide an easy to use way for LabVIEW to read and write data to the OPC Tags. OPC Servers are separate pieces of software outside of LabVIEW, and NI provides the OPC Servers as a separate purchase, for a simultaneous driver usage of a single driver or for unlimited drivers .

The Experimental Physics and Industrial Control System (EPICS) is a set of open-source software tools you can use to develop large, distributed control systems. EPICS also refers to the architecture of such systems, as well as to the collaboration group developing the related tools. Refer to the Argonne National Laboratory web site for more information about EPICS and to download the latest version of EPICS. EPICS systems use the Channel Access (CA) network protocol to pass data between Channel Access clients (CACs) and Channel Access servers (CASs). The CA network protocol is a TCP/IP-based protocol. 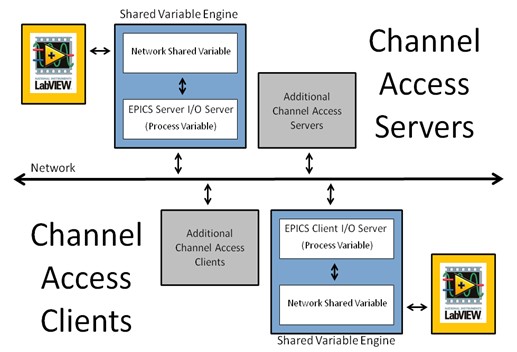