Using I2C with LabVIEW and the USB-845x

This page provides an overview of the USB-845x and how to use it with NI LabVIEW. This guide requires the installation of LabVIEW and the NI-845x Driver Software.

The NI USB-845x is an interface for connecting to and communicating with I2C, SMBus, and SPI devices. With plug-and-play USB connectivity, the NI USB-845x is a portable solution to communicate with consumer electronics and integrated circuits. It also includes eight general-purpose digital I/O lines for a variety of applications, such as configuring the address of I2C devices or toggling LEDs.

The USB-845x can be physically located more closely to I2C/SPI devices than PCI interfaces, reducing I2C bus length and minimizing noise problems. Additionally, the interface provides +5 V and GND to power circuits up to 230 mA with no external power supply.

A control byte is the first byte received following the Start condition from the master device. The control byte consists of a 4-bit control code, typically set as ‘1010’ binary for read and write operations. The next three bits of the control byte are the Chip Select bits (A2, A1 and A0).

The Chip Select bits allow the use of up to eight devices on the same bus and are used to select which device is accessed. The Chip Select bits in the control byte must correspond to the logic levels on the corresponding A2, A1 and A0 pins for the device to respond. These bits are in effect the three Most Significant bits of the word address.

Example of the control byte format 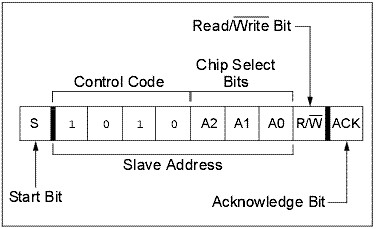 Basic LabVIEW API for Device Addressing
Use the property node to define the device address. If only one slave is connected to CS 0 the address is typically h50 (1010000- see control byte format above). The configuration output goes then to the high level Write, Read or Write/ Read VIs.

Advanced LabVIEW API for Device Addressing
Use the Script Address + Write or + Read Functions after a Script Issue Start function to program the device address.

Byte Write
Following the Start condition from the master, the control code (four bits), the Chip Select (three bits) and the R/W bit (which is logic low for write operations) are clocked onto the bus by the master transmitter. This indicates to the addressed slave receiver that the address byte (for single address byte) or bytes (for two address bytes) will follow after it has generated an ACK bit during the ninth clock cycle.

Therefore, the next byte transmitted by the master is the high byte of the word address and will be written into the Address Pointer. The next byte is the Low Address Byte. After receiving another ACK, the master device will transmit the data word to be written into the addressed memory location. The slave ACKs again and the master generates a Stop condition. This initiates the internal write cycle (from the buffer to the memory) and during this time, the Slave will not generate ACK signals.

Example of a Byte Write

Page Write
The write control byte, word address and the first data byte are transmitted to the slave receiver in the same way as in a Byte Write. But instead of generating a Stop condition, the master transmits up to 127 additional bytes, which are temporarily stored in the on-chip page buffer and will be written into memory after the master has transmitted a Stop condition. After receipt of each word, the seven lower Address Pointer bits are internally incremented by one. If the master should transmit more than 128 bytes prior to generating the Stop condition, the address counter will roll over and the previously received data will be overwritten. As with the Byte Write operation, once the Stop condition is received, the internal write cycle will begin (from the page buffer to the memory).  Refer to Figure 8 for an example of a Page Write.

Example of a Page Write

Note: You need to look at the page size of your chip!

If a Page Write command attempts to write across a physical page boundary, the result is that the data wraps around to the beginning of the current page (overwriting data previously stored there), instead of being written to the next page as might be expected. It is therefore necessary for the application software to prevent page write operations that would attempt to cross a page boundary.

Basic LabVIEW API for Write Operations
The basic write operation takes the device descriptor, the configuration reference (including the device address) and uses a data byte array to write the data bytes to the address specified in the first two bytes.

The write functions acts like it is described above. To write to single byte addresses use a U8 integer instead of the U16 for the first data byte. 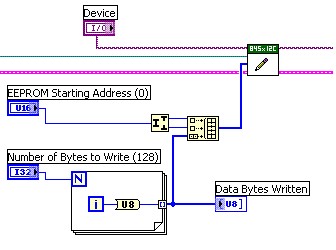 Advanced LabVIEW API for Write Operations
Use the Script write function twice to write the EEPROM Start address and the data bytes, followed by the Issue Stop function to have the same result as using the basic function.

Read operations are initiated in the same way as write operations with the exception that the R/W bit of the control byte is set to ‘1’. There are three basic types of read operations: current address read, random read, and sequential read.

Current Address Read
The slave normally contains an address counter that maintains the address of the last word accessed, internally incremented by ‘1’. Therefore, if the previous read access was to address ‘n’ (n is any legal address), the next Current Address Read operation would access data from address n + 1. Upon receipt of the control byte with R/W bit set to ‘1’, the slave issues an ACK and transmits the 8-bit data word. The USB-845x will not ACK the transfer but does generate a Stop condition and the Slave discontinues transmission.

The slave will then issue an ACK and transmit the 8-bit data word. The USB-845x will not ACK the transfer but does generate a Stop condition which causes the Slave to discontinue transmission. After a Random Read command, the internal address counter will point to the address location following the one that was just read.

Sequential Read
Sequential Reads are initiated in the same way as a Random Read except that after the slave transmits the first data byte, the master issues an ACK as opposed to the Stop condition used in a Random Read. This ACK directs the slave to transmit the next sequentially addressed 8-bit word (Reference the Example of Random Read). Following the final byte transmitted to the master, the master will not generate an ACK, but will generate a Stop condition.

Basic API for Read Operations
For the Basic API, we have two different VIs to reflect two different ways to read data. The easiest way is to read the current address as described in the Read Operations section. Therefore you need to use the Read VI and the Read process starts at memory address ‘0’ and the next time behind the last address you read. This is because you do not specify which start address to use and the slave uses his address counter that maintains the address of the last word accessed.

The second way to read data using I2C is using the Write/Read Function. For the Random and Sequentially Read this function performs a Write to specify the Start address to read from and a Read to read the data from this address. The Random Read reads only a single byte on a random position specified by the start address. The Sequentially Read reads as much data as specified with Number of Bytes to Read.

Example of 845x Advanced API for Random or Sequentially Read

Where to find examples on a Windows XP system:

Note: To find the shipping examples on your computer, you will need to download the NI-845x Driver which can be found in the Related Links section.

The SPI bus is a four-wire, full-duplex serial interface. Three of the wires, SCK, MOSI, and MISO, are shared along with a fourth wire, known as the chip select, which is a direction connection between the master and a single slave.

Communication across SPI uses a system known as data exchange. Whenever a bit is written to an SPI device across the MOSI lines, the SPI device concurrently returns a bit on the MISO line. Because data is transferred in both directions, it is up to the receiving device to know whether the received by is meaningful or not. For example, to receive data from an EEPROM, the master must configure the EEPROM to send n bytes of data and then must send n bytes to be exchanged for valid data. These bytes can usually be any value, and writing them serves only to clock the data out of the receiving device.