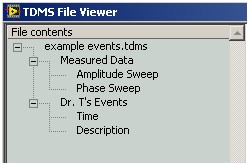 Every TDMS object can have an unlimited number of properties. Each TDMS property consists of a combination of a name (always a string), a type identifier, and a value. Typical data types for properties include numeric types such as integers or floating-point numbers, time stamps or strings. TDMS properties do not support arrays. If a TDMS file is located within a search area of the NI DataFinder, all properties automatically are available for searching.