Measuring Position and Displacement with LVDTs

This white paper describes LVDTs and explains how they work. It also details the requirements for measuring LVDTs, and the signal conditioning required for the measurement. Finally, we’ll talk about how you can use the PXI Displacement Input Module to measure AC LVDT input channels.

What is Linear Displacement Measurement

A linear displacement typically has units of millimeters (mm) or inches (in.) and a negative or positive direction associated with it.

Linear variable differential transformers (LVDT) are used to measure displacement. LVDTs operate on the principle of a transformer. As shown in Figure 2, an LVDT consists of a coil assembly and a core. The coil assembly is typically mounted to a stationary form, while the core is secured to the object whose position is being measured. The coil assembly consists of three coils of wire wound on the hollow form. A core of permeable material can slide freely through the center of the form. The inner coil is the primary, which is excited by an AC source as shown. Magnetic flux produced by the primary is coupled to the two secondary coils, inducing an AC voltage in each coil. 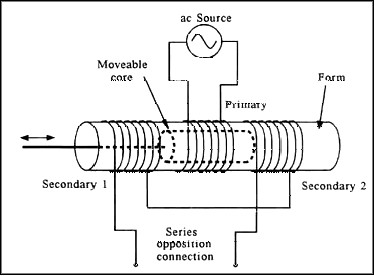 An LVDT measures displacement by associating a specific signal value for any given position of the core. This association of a signal value to a position occurs through electromagnetic coupling of an AC excitation signal on the primary winding to the core and back to the secondary windings. The position of the core determines how tightly the signal of the primary coil is coupled to each of the secondary coils. The two secondary coils are series-opposed, which means wound in series but in opposite directions. This results in the two signals on each secondary being 180 deg out of phase. Therefore phase of the output signal determines direction and its amplitude, distance.

Figure 3 depicts a cross-sectional view of an LVDT. The core causes the magnetic field generated by the primary winding to be coupled to the secondaries. When the core is centered perfectly between both secondaries and the primary, as shown, the voltage induced in each secondary is equal in amplitude and 180 deg out of phase. Thus the LVDT output (for the series-opposed connection shown in this case) is zero because the voltages cancel each other. 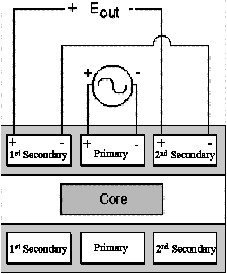 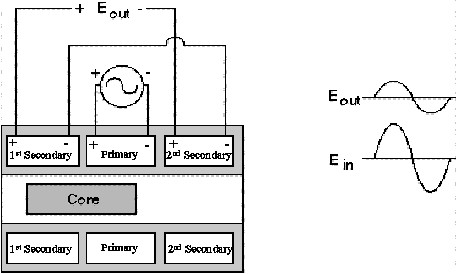 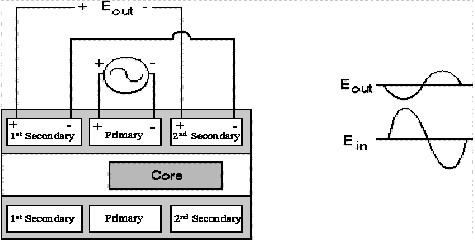 To summarize, “The LVDT closely models an ideal zeroth-order displacement sensor structure at low frequency, where the output is a direct and linear function of the input. It is a variable-reluctance device, where a primary center coil establishes a magnetic flux that is coupled through a center core (mobile armature) to a symmetrically wound secondary coil on either side of the primary. Thus, by measurement of the voltage amplitude and phase, one can determine the extent of the core motion and the direction, that is, the displacement.”[1] Figure 6 shows the linearity of the device within a range of core displacement. Note that the output is not linear as the core travels near the boundaries of its range. This is because less magnetic flux is coupled to the core from the primary. However, because LVDTs have excellent repeatability, nonlinearity near the boundaries of the range of the device can be predicted by a table or polynomial curve-fitting function, thus extending the range of the device.

LVDT signal conditioners generate a sinusoidal signal as an excitation source for the primary coil. “This signal is typically between 50 Hz and 25 kHz. The carrier frequency is generally selected to be at least 10 times greater than the highest expected frequency of the core motion.”[1] The signal conditioning circuitry synchronously demodulates the secondary output signal with the same primary excitation source. The resulting DC voltage is proportional to core displacement. The polarity of the DC voltage indicates whether the displacement is toward or away from the first secondary (displacement left or right).

Broad ranges of LVDTs are available with linear ranges from at least ±50 cm down to ±1 mm. The time response is dependent on the equipment to which the core is connected. The units of an LVDT measurement are typically in mV/V/mm or mV/V/in. This indicates that for every volt of stimulation applied to the LVDT there is a definite feedback in mV per unit distance. A carefully manufactured LVDT can provide an output linear within ±0.25% over a range of core motion, with very fine resolution. The resolution is limited primarily by the ability of signal conditioning hardware to measure voltage changes.

Buffered Mode for normal operating and high throughput applications is ideal because the module samples at the requested hardware sampling rate and efficiently returns data to the user in software. Buffered mode is optimized for measurement performance, but at the expense of higher latency due to the inherent filter day of the delta-sigma ADC. Hardware-Timed Single Point (HWTSP) Mode is optimized for low-latency data transfer. This allows for greater control of the rate at which data is returned to the controller. HWTSP mode is ideal when loop timing is critical, like closed-loop control and real-time applications. Four on-board timing engines allow for different timing, triggering, and sample modes simultaneously across the same module on a per-channel basis. This allows for a diverse set of sensors without the need for additional measurement hardware.

Currently, SET provides a LVDT module that is compatible with CompactRIO.

Note: Product Manuals can be found at www.ni.com/manuals