When this feature was first introduced with NI-DAQmx 8.0, you could include analog input channels from multiple dynamic signal analysis (DSA) devices in a single task. Since that release, NI has expanded the feature to provide additional options, depending on which NI DAQ hardware you are using. You can now “channel expand” analog output, digital input, or digital output channels and even apply use a channel-expansion task across multiple chassis. Channel expansion is one of the simplest ways to synchronize multiple devices; however, this capability differs depending on which NI DAQ device you are using. For example, you cannot channel expand between products of different bus types, such as PCI and PXI Express. This white paper examines the reasons why and the considerations you need to make before channel expanding your devices.

Within a single CompactDAQ chassis or controller, you can use the NI-DAQmx driver to include channels from multiple C Series I/O modules into a single task. The driver will then automatically synchronizes the modules. You can channel expand almost all types of channels, including analog input, analog output, digital input, and digital output, within a single chassis. However, you must meet some requirements to use this feature. For instance, all of the channels within a single task must be of the same I/O type. You cannot mix analog input channels with analog output channels using this feature.

With channel expansion, you can mix different types of analog input modules (Scanned, Delta-Sigma, Slow Sample) into the same task and allow the NI-DAQmx driver to automatically synchronize them for you. The driver chooses the best possible method to synchronize the different types of modules. Learn more about these different synchronization types. When you have a mixture of C Series Delta-Sigma modules, such as the NI 9234 and NI 9218, within a single task, you need to account for the filter delay between the devices. This delay is also known as the input delay. Refer to your device’s specifications manual for the delay for your device.

Starting in NI-DAQmx 9.9, you could use the NI 9469 C Series synchronization module to link multiple CompactDAQ chassis or chassis connected to a CompactDAQ controller, apply the channel expansion feature to make them feel like one device, and let the driver handle this synchronization automatically. The NI 9469 allows for simplified signal routing and coding and synchronizes Scanned, Slow Sample, and Delta-Sigma analog input modules; digital input modules; digital output modules; and analog output modules in differing chassis topologies. You can configure the connections between the NI 9469 modules in Measurement & Automation Explorer (MAX) software, as shown in Figure 3. 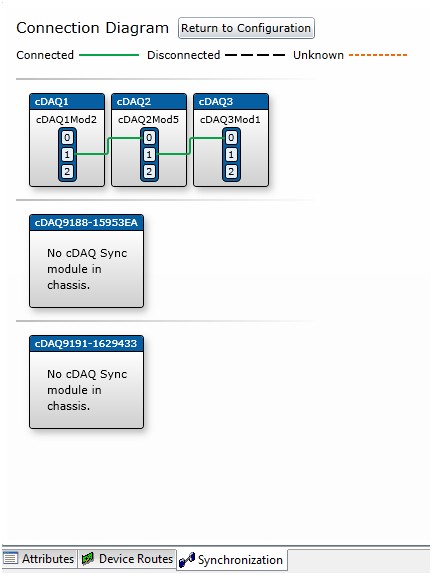 After you configure the NI 9469 (Figure 4) in MAX, the process of configuring the task is almost identical to the single chassis channel expansion method. 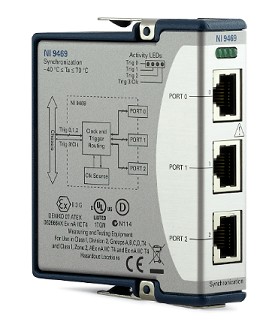 However, when using channel expansion across multiple chassis, you must make a few considerations. The first channel in the channel list within the task must be inside the master chassis. The master chassis is determined by the physical configuration of the chassis connections, and it must be able to output signals to the slave chassis. Also, if the task contains channels from Delta-Sigma modules, a channel on a Delta-Sigma module within the master chassis needs to be first on the channel list for the task. For additional information about the NI 9469, including different topology scheme and multichassis synchronization requirements, refer to the NI 9469 operating instructions and specifications manual. 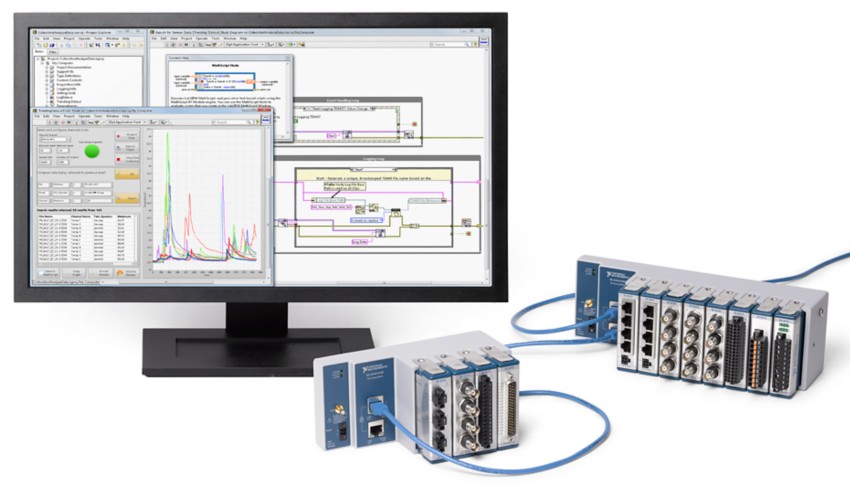 Starting in NI-DAQmx 17.6, FieldDAQ can take advantage of the ease-of-use of channel expansion while synchronizing across other FieldDAQ devices. The setup for FieldDAQ is identical to the C Series I/O module programming experience except for the device naming. FieldDAQ is a TSN enabled device, ensuring that it can synchronize via non-channel expansion, with other TSN devices over the network with only a standard Ethernet cable. 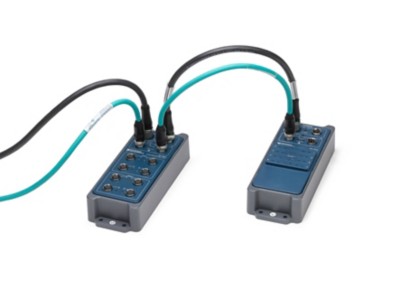 Figure 6. FieldDAQ uses the IEEE 802.1AS profile for synchronization

With PCI/PXI/PXI Express DSA devices, you can use the NI-DAQmx driver to include multiple analog input channels in a single task and automatically synchronize them for you. The setup is almost identical to the C Series I/O module programming experience except for some of the device naming conventions. However, this group of devices presents some hardware limitations when using this programming feature, and these vary from device to device. For instance, one of the more common limitations is accounting for the filter delay if you include a mixture of channels from different device families that support channel expansion. Learn more about the delta-sigma analog-to-digital converter (ADC) and why a filter delay occurs. 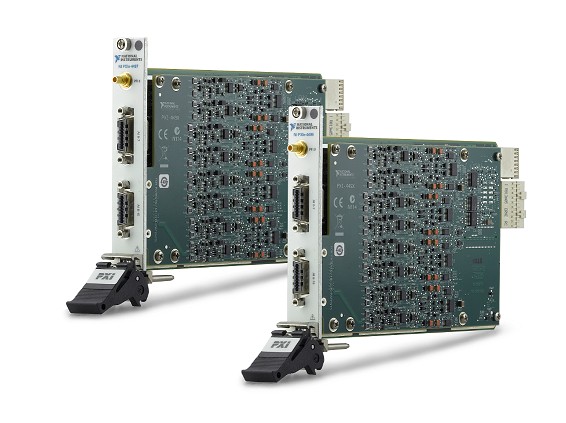 Figure 7. The NI PXIe-4497 is one of the DSA devices designed for channel expansion.

Other limitations depend on which form factor of DSA devices you are using. If you are using channel expansion with PXI or PXI Express modules, the modules must all be within the same PXI or PXI Express chassis, and that chassis must first be identified within MAX. If you are using PCI variants of the NI 4461/62 and NI 447x devices, you must use a RTSI cable to connect the boards and identify that cable within MAX. Learn what RTSI is and how to configure it.

Caveats when attempting to perform channel expansion with the NI 447x include the following:

For details on DSA channel expansion device combinations supported by a specific release of NI-DAQmx, refer to the DSA, SC Express, and X Series Multidevice Tasks topic in the NI-DAQmx Help.

With S Series DAQ devices, you can use the NI-DAQmx driver to include multiple analog input channels from these devices into a single task and automatically synchronize them for you. With this type of DAQ device, you are limited to the analog input I/O type when using the channel expansion feature. The programming experience is similar to that in the previous two sections. 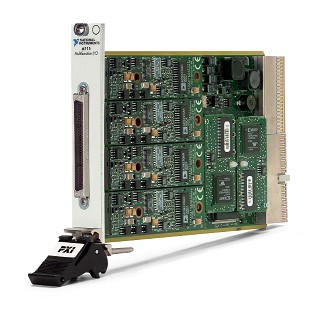 Figure 8. The PXI-6115 is one of the S Series devices designed for channel expansion.

As with the DSA devices, you must consider the form factor of the S Series devices you want to synchronize. If you are using PXI or PXI Express modules, they must all be within the same PXI or PXI Express chassis, and that chassis must first be identified within MAX. If you are using PCI variants, you must use a RTSI cable to connect the boards and identify that cable within MAX. Refer to the DSA devices section for more information about RTSI configuration.

You also can use channel expansion with SC Express and X Series devices to include multiple devices in a single task, let NI-DAQmx automatically synchronize them, and enable trigger skew correction for the devices. By having NI-DAQmx enable trigger skew correction, the driver can compensate for the skew of a trigger signal across multiple devices by locking the trigger to the reference clock. It also allows the devices to respond to a trigger on a subsequent edge of that clock rather than immediately. The trigger skew correction feature is only in PXI Express chassis. With these types of devices, you can channel expand either analog input or output channels; however, all of the channels within a single task must be of the same I/O type. Another caveat for X Series is USB devices cannot be used for channel expansion across multiple devices. 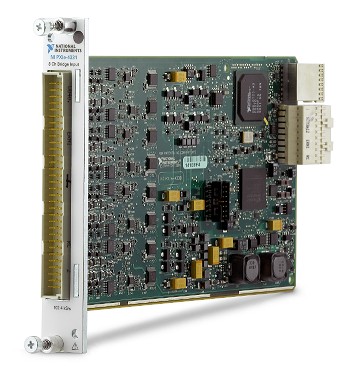 Figure 9. The NI PXIe-4331 is one of the SC Express modules designed for channel expansion.

For synchronization to work properly, all PXI Express modules must be within the same identified chassis, and PCI Express boards must be connected by a configured RTSI cable. However, when channel expanding analog input channels within the PXI Express subsection of this group, the task can only include channels from devices that support channel expansion with one another.

For details on SC Express and X Series channel expansion device combinations supported by a specific release of NI-DAQmx, refer to the DSA, SC Express, and X Series Multidevice Tasks topic in the NI-DAQmx Help.

When channel expanding analog output channels within the PXI Express subsection of this group, the task must include only channels from NI 4322 and PXI Express X Series devices.

When configuring synchronization between multiple DAQ devices, you may have difficulty ensuring that you are routing the correct triggers and clocks to the appropriate places. However, the NI-DAQmx driver can help you apply channel expansion for simplifying your program, automatically synchronize multiple channels from different devices, and route those triggers and clocks for you. Channel expansion is one of the easiest and often most precise ways to synchronize multiple NI DAQ hardware devices.