As wireless technology research expands to 5G, the need to optimize signal strength becomes more critical. With 5G, the challenges of signal propagation and smaller antenna size require extensive analog beamforming techniques. The idea of beamforming in mobile communications is not new, however, because digital beamforming has been used extensively with LTE networks already. Above 24 GHz, analog beamforming of narrower beam widths gives 5G base stations the ability to steer downlink signals more efficiently. To optimize this process, additional research and testing need to be conducted to better characterize and test each beam with over-the-air measurements to validate radio performance. You can prototype test systems with hybrid beamforming by using a testbed with the NI mmWave Transceiver System.

Traditionally, creating a testbed for research in this area presents significant implementation challenges. However, the mmWave Transceiver System overcomes the technical challenges shown in Figure 1.

Figure 1. Challenges in Building a 5G mmWave gNodeB and UE

Using traditional analog beamforming, you can create a single beam by applying a phase delay (time delay) to each antenna element. However, when you need multiple simultaneous beams, you can apply a phase delay to each incoming signal and then add the beams. The most flexible approach is full digital beamforming for which each antenna has its own digital transceiver. With full digital beamforming, you can use a flexible number of beams and beamforming approaches and change them at will.

With the NI mmWave Hybrid Beamforming Testbed, you can conduct hybrid beamforming by moving signals from the analog to digital domain. This mostly digital transceiver system combines an off-the-shelf phased array for the analog domain with the mmWave Transceiver System, additional FPGAs, and timing and synchronization modules to incorporate the digital domain. You can use this system to test a base station with up to eight antennas communicating with a maximum of eight user equipment (UE) antennas.

Learn more about this system’s hardware in the white paper, “Introduction to the NI mmWave Transceiver System Hardware.”

You can combine the mmWave Transceiver System with an Anokiwave phased array to create an off-the-shelf phased array solution. For example, the phased array in Figure 5 is a 64-element planar antenna that works with Anokiwave’s AWMF-0108 ICs to allow for hybrid beamforming. 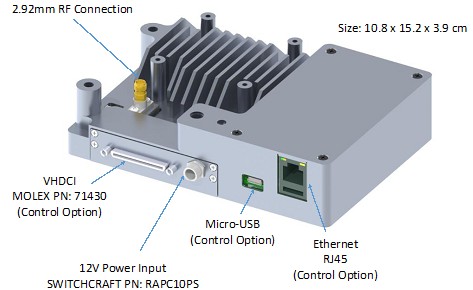 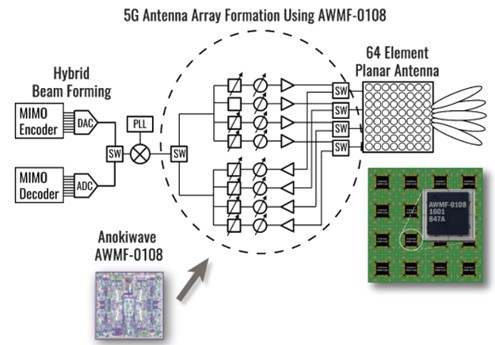 With the modularity of this testbed, you can integrate phased arrays from other vendors.

By combining mmWave Transceiver System hardware with the Anokiwave phased arrays, you can create a testbed with the specifications you need for hybrid beamforming research based on the 5G New Radio (NR) standard (see Table 1).

To help you design and test beam algorithms, the hybrid beamforming testbed uses FPGA modules in the PXI chassis to handle communication rules, error correction, decoding and encoding, and signal mapping, which you configure with LabVIEW to handle the digital domain of beamforming. The baseband transceiver modules, together with the IF/LO modules, transmit and receive signals to and from the mmWave heads. You can then connect the phased arrays to the mmWave radio heads through a single SMK cable. The signals entering and exiting the antenna are at a center frequency of 28.5 GHz.

The 5G NR physical layer can scale to multiple MIMO streams and to upper layer integration. This scalability is shown in the example testbed diagram of a four-transceiver system in Figure 7. In addition to the configurations shown here, various custom configurations are available to meet specific research needs.

The mmWave Transceiver System is capable of not only streaming but also processing 2 GHz of bandwidth per channel in real time using LabVIEW FPGA, parallel processing, and a multi-FPGA architecture. In most FPGA processing, the clock rate of the FPGA drives the rate at which you can process data.

In addition to using parallel processing to process large amounts of raw data, you can use multiple FPGAs to build the processor in highly complex wireless communications systems. Specifically, the 5G NR standard for mmWave frequencies uses a combination of computationally intensive algorithms to encode, decode, modulate, demodulate, and multiplex signals in the physical layer. You need to process the physical layer and portions of the MAC layer in less than one subframe, on the order of nanoseconds, so your system can behave as a real-time communications system and so you can create a successful wireless link. Figure 8 shows a high-level block diagram of different computational and processing areas inside a 5G NR communications link. Figure 9 more specifically shows the mapping of different processing tasks on the multiple FPGAs, which you implement with software configuration in LabVIEW.

NI designed the mmWave Hybrid Beamforming Testbed for use in 5G research. This testbed combines mmWave Transceiver System hardware with additional FPGAs, phased arrays, and LabVIEW to overcome many of the traditional challenges of implementing a beamforming testbed. The modularity and scalability of the testbed provide a solution for multiple prototyping use cases.