Home Perspectives The Testing We Need to Get to Mars

The Testing We Need to Get to Mars

The tech needed to get a manned spacecraft to Mars is achievable, but to reach the Red Planet, we must significantly scale up testing.

How Test Will Break Through Mars’s Atmospheric Pressures

When it comes to space exploration, Earth’s unassuming red neighbor certainly has a lot of people talking these days. Of course, we’re referring to Mars. For decades, scientists have been searching for answers on the planet’s atmosphere and ability to sustain life. But more recently, the conversation has shifted to something even more impressive—when will society land a manned spacecraft on Mars? That date is getting closer and closer to reality. On the Lex Friedman Podcast in late 2021, SpaceX Founder Elon Musk stated he planned to land a human on Mars “worst case” in 10 years.

It’s hard to say if that’s far-fetched or not. The technology is getting closer every day, but it’s going to take a significant amount of scaling up testing to get us there.

Even with the increase of privatized space exploration and the innovation it’s created, getting a human to Mars is still an extremely complicated process. On its closest approach, Mars is 200 times farther from Earth than the moon. Though aerospace has data and experience with astronauts staying on a space station for up to a year, the journey to Mars would be a longer duration in space. That extended time puts extreme physical and psychological stress on the human body.

One answer to this problem is to use robotic exploration instead, but even that isn’t without its complications. Because of the distance, it takes 20 to 40 minutes for instructions to reach Mars and another chunk of time for the information to relay back to Earth. Compared to the moon, where the lag is just a few seconds, the difficulty literally multiplies—especially in scenarios that need an immediate response.

But distance and time is only part of the issue. “One of the really big challenges is just landing in the first place,” Abigail Harrison (aka “Astronaut Abby”), a science communicator and founder of The Mars Generation, tells us. The moon has no atmosphere at all, and Mars’s atmosphere is much thinner—less than 1 percent of the Earth’s. On the surface, Mars’s atmospheric pressure is .095 psi compared to Earth’s sea-level atmospheric pressure of 14.7 psi. “When landing back on Earth, we use large parachutes that expand and heat shields to slow spacecraft down to a velocity that is safe. And we’ve got that figured out. We’ve been doing it for decades and decades,” Abby states. To land on the moon, spacecraft uses rockets and boosters to slow and approach safely since there is no friction with the lack of atmosphere.

However, Mars makes propulsion testing difficult. “There’s not enough atmosphere to utilize the same types of parachute technology used on Earth, but too much to rely on rockets and boosters because those kick up a lot of dust, which gets caught up in the atmosphere and causes problems,” Abby explains. To solve the problem, engineers are working on the idea of an inflatable aeroshell to increase the surface area for landing. Since storage capacity is at a premium for a rocket to Mars, the aeroshell would fold and pack up like an air mattress so it fits into a tiny area.

It’s all a fascinating combination of technology and data that has informed all the space flights up to this point. But a better question is—how will we test it?

Of course, it goes without saying that you can’t simply walk outside on Earth and begin testing aerospace component tests meant for Mars. Yet, extensive test is essential for the sheer safety of this kind of exploration. The first place to start is with digital engineering and simulation. Digital twins, hardware in the loop (HIL), and virtual reality are already heavily utilized in the aerospace industry. These essential steps help engineers make the correct decisions about when and how to physically test.

To test the “real thing” for Mars, engineers look up to our own sky here on Earth. Using the example of the aeroshell, they launch it up to a certain altitude in Earth’s atmosphere to match Mars’s atmospheric pressure. “You can then have it deploy at the correct angle, simulating a Martian entry from orbit to take data readings,” Abby explains. Engineers can get as much as 10 minutes of data at the higher altitude before the equipment continues to rise and eventually burns up into the atmosphere.

It’s clear that there is a lot of testing that needs to happen before a crewed Mars landing is possible, but why is all of this important beyond the search for a greater frontier? We need to remember how the technology we develop for space exploration transfers to life here on Earth. Memory foam, infrared thermometers, computer mice, and countless other tools we use were developed directly from NASA technology.

The technology it will take for us to get to Mars may feel like it’s only for the stars, but at the end of the day, the tests are incredibly valuable for life here on Earth as well. “We’ll be able to utilize the things and features needed to go to Mars,” Abby shares. “These robotic counterparts will make our jobs easier, trips safer, and everything more functional. It all comes back to testing.” 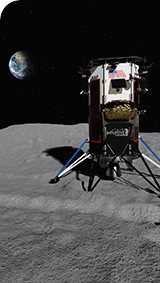 The team at Intuitive Machines has its sights set on transforming space exploration and enabling commercial opportunities in cislunar space. With the help of NI’s test and data acquisition technologies, IM is accelerating aerospace innovation. 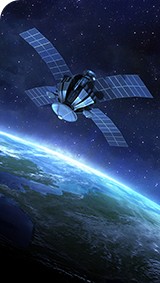 In low-Earth orbit, more than 100 million pieces of debris surround the planet, from abandoned satellites to destroyed spacecraft and other leftovers from missions. This debris is a real threat, but tested tech can clean things up.