Part II: How To Reduce Errors When Switching Low-Current Signals

Signals in the 1 μA range or less are generally considered low-current and as in the case of low voltage signals, require special care when routed. Once again minimizing system error is essential because even a small offset current arising from the system can significantly raise percentage error and thus affect signal integrity. Some main obstacles to overcome when switching low-current signals are leakage currents arising from the switching system and cable connections, offset currents, and debounce time of the relay.

Leakage current is the total amount of error current flowing through a switching circuit to a location other than its output. Some of the main factors that contribute towards leakage current include:

a. Signal voltage level
b. Currents from parasitic elements in a circuit
c. Current radiated by components in close proximity to switching circuit (for example, a neighboring switch channel, high voltage sources, fluorescent lighting, and so on)

Figure 2. Dependence of Leakage Current on Voltage Level of Signal

In addition to signal levels, hidden parasitic elements that form part of a switching circuit also contribute significantly to the net leakage current in a switching system. The circuit in Figure 3 highlights some of the many unwanted elements that may reside in a real world switching system. CG is the parasitic capacitance between the relay lead and ground. Every time this capacitor discharges, a leakage current flows through the circuit. RS is the leakage resistance across the contacts of a relay caused due to PCB resistance, conductance of air, pollution and several other factors. This resistance which is usually in the GΩ range provides a path for error current to flow through the switch even when it is open.

Another source for leakage current is the effect of sources outside the switching circuit. Factors such as pollution, dust, resistance of air, and PCB resistance, provide a path for current from sources such as fluorescent lighting, high voltage sources, and the a neighboring channel on a switch module to leak in to the switching circuit. Figure 3 displays how current leakage takes place from one channel to another in a switch module via resistor Rsurface. Factors that contribute to Rsurface are resistance of PCB in the switch module, resistance in air, and dust particles on the PCB surface. 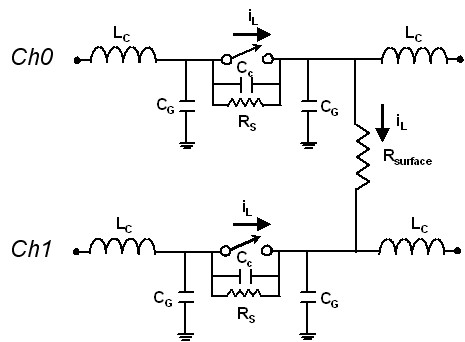 Armature and reed relay contacts “bounce” when they close. When closing, the contacts touch momentarily, making and breaking continuity, until finally remaining in the closed position. The concept of bouncing is analogous to that of a ball being dropped on the floor. When the ball is dropped it bounces for a few seconds before it gives up to the force of gravity and settles on the floor’s surface. Electromechanical relays are made up of contacts which meet each other to make or break the circuit. Since these contacts are made of metal, they have some mass. Furthermore, at least one of these contacts lies on a movable strip of metal which has springiness. Both these factors cause relay contacts to bounce as they make or break a connection. Figure 4 demonstrates relay bounce. 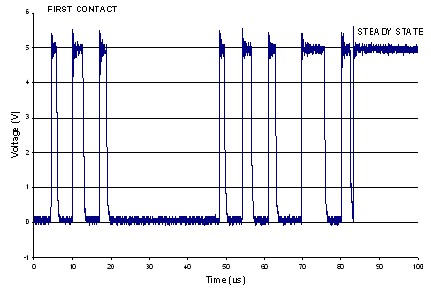 Figure 4. Bouncing Occurs When a Relay Transitions Between Open and Close

From the above figure it can be seen that during the bounce time, the voltage applied to the circuit fluctuates. Once the relay contacts close completely, this voltage settles to a steady value. At this time, the erroneous transient currents generated due to the discharge or parasitic capacitances also reach a steady value and can be calibrated out of the system. Relay modules usually specify bounce time of relays. To minimize the effects of relay bouncing, it is advisable to wait longer than this specified number in order to make sure that measurements made are accurate.

The cables carrying the current must be very well shielded to reduce noise currents due to electromagnetic interference and electric fields. NI recommends using cables with at least 90% shielding effectiveness. To protect the signal from environmental factors such as error currents due to humidity, the insulator should have low water absorption. Ideally, the cables should be in a humidity controlled, temperature controlled environment. Also, any movements in the cables can induce charge, so it is important to tie cables down so that they are stationary.

To reduce measurement errors when routing low-current signals, always use shielded and twisted pair cables that are made of the same metal or material as the connector on the switch module. Such cables improve help limit transients in circuit thus reducing the net leakage current in the system.

View Part I and Part III of this tutorial series to learn more about low-level switching: