The simple user interface implements the following execution states. Refer to the topics below for the functional details of each state.

The C# user interface is implemented using the Windows form class. When the application starts, a new form is created, and the constructor MainForm() initializes the form based on the .NET designer settings. Then, the MainForm_Load callback is called and registered to the Load event of the form in the designer.

The Mainform_Load() callback connects manager controls to visible controls and starts the TestStand engine. The user interface contains the following types of controls:

Like typical .NET controls, the events for the TestStand UI controls are shown in the property browser when you select the control in the designer. In the simple user interface, five event callbacks are defined for the ApplicationManager control. 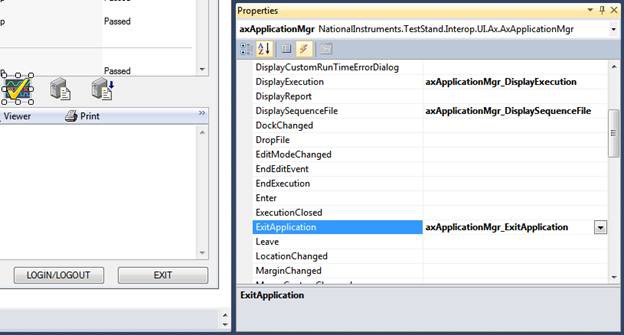 The callback function has a specific prototype based on the particular event being handled. The axApplicationMgr_ExitApplication callback is shown below. In this callback, the UI closes the TestStand UI form and starts .NET garbage collection to ensure all TestStand objects are freed.

In the simple user interface example, the ApplicationManager control generates each specified event, but other controls generate events as well. Refer to the Handling Events [link here] help topic for more information about using the Event Registration functions to handle TestStand events.

CommandKinds.CommandKind_LoginLogout,           //Type of command to connect

Many connection functions are available for each manager control depending on the desired functionality of the visible control. Refer to the subtopics of the Connecting Manager Controls to Visible Controls [link here] help topic for more information about the available types of connections.

When using the connectCommand method, as in the case of the login/logout button, you must specify a commandKind that represents the specific command that will be associated with the visible control. In this case, the function call specifies the command kind CommandKinds.CommandKind_LoginLogout, which gives the Login/Logout button its specific functionality.  Refer to the CommandKinds Enumeration [link here] help topic for more information about available commandKinds.

After connecting all of the visible controls, the MainForm_Load callback calls the axApplicationMgr.Start()

The following table describes the .NET events handled by this event structure:

Attempts to close the UI, such as clicking the windows close glyph or Exit button, initiate the shutdown process. Before the form is closed, the Mainform_Closing event callback is executed, which calls the axApplicationMgr.Shutdown() method to shut down the TestStand engine.

If this method returns a value of “True,” TestStand has completed shutdown, and the form can be closed.  Otherwise, the user interface must remain open until the ExitApplication  event has been generated, indicating that the engine has successfully shut down.  In this case, the close event is cancelled to prevent the window from closing before shutdown is complete.

Error information in the Simple user interface example is tracked by using the try-catch statement, just as in typical .NET applications. Errors that occur in TestStand methods generate an exception, which is displayed to the user using the messageBox() method.

To add a new control to the simple user interface, follow the steps below. In this example, you will create a new button to launch the TestStand station options dialog box.

To initiate an action in response to a TestStand event, create a new callback function using the properties pane in the designer. In this example, you will create a callback to handle user generated UIMessages.

To add native controls to the user interface, create the control in the designer and use an event callback function to add functionality, as you would in a typical .NET user interface application.  Additionally, you can implement some TestStand functionality with native controls using the GetCommand and Command.Execute methods, as shown in the example below. Any of the manager controls can call the GetCommand method to access the connections implemented by each control.