This document is part of the Introduction to Programming With NI R Series. This document specifically describes the high-channel-count PWM example personality for R Series devices. The PWM personality was designed to target high-channel-count needs for both PWM output and input. Currently, no data acquisition (DAQ) device is capable of more than four PWM outputs. The current solution is to use multiple DAQ boards capable of PWM and synchronize their outputs. This personality alleviates that need by customizing a DAQ board to have 16 PWM channels configurable for input or output. The attached host example code uses 12 PWM outputs and four PWM inputs.

The NI LabVIEW FPGA code is the portion of this code embedded on the R Series board. The code defines the FPGA in the same way an ASIC defines a multifunction DAQ board. It was written with LabVIEW FPGA and compiled into a bitfile. It is in its finalized form and does not require you to use the LabVIEW FPGA Module. However, you do need LabVIEW FPGA to customize this code.

This LabVIEW FPGA personality implements the single-cycle Timed Loop architecture, with each loop dedicated to a specific DIO line. See Figure 1 for a look at the block diagram for the LabVIEW FPGA code. 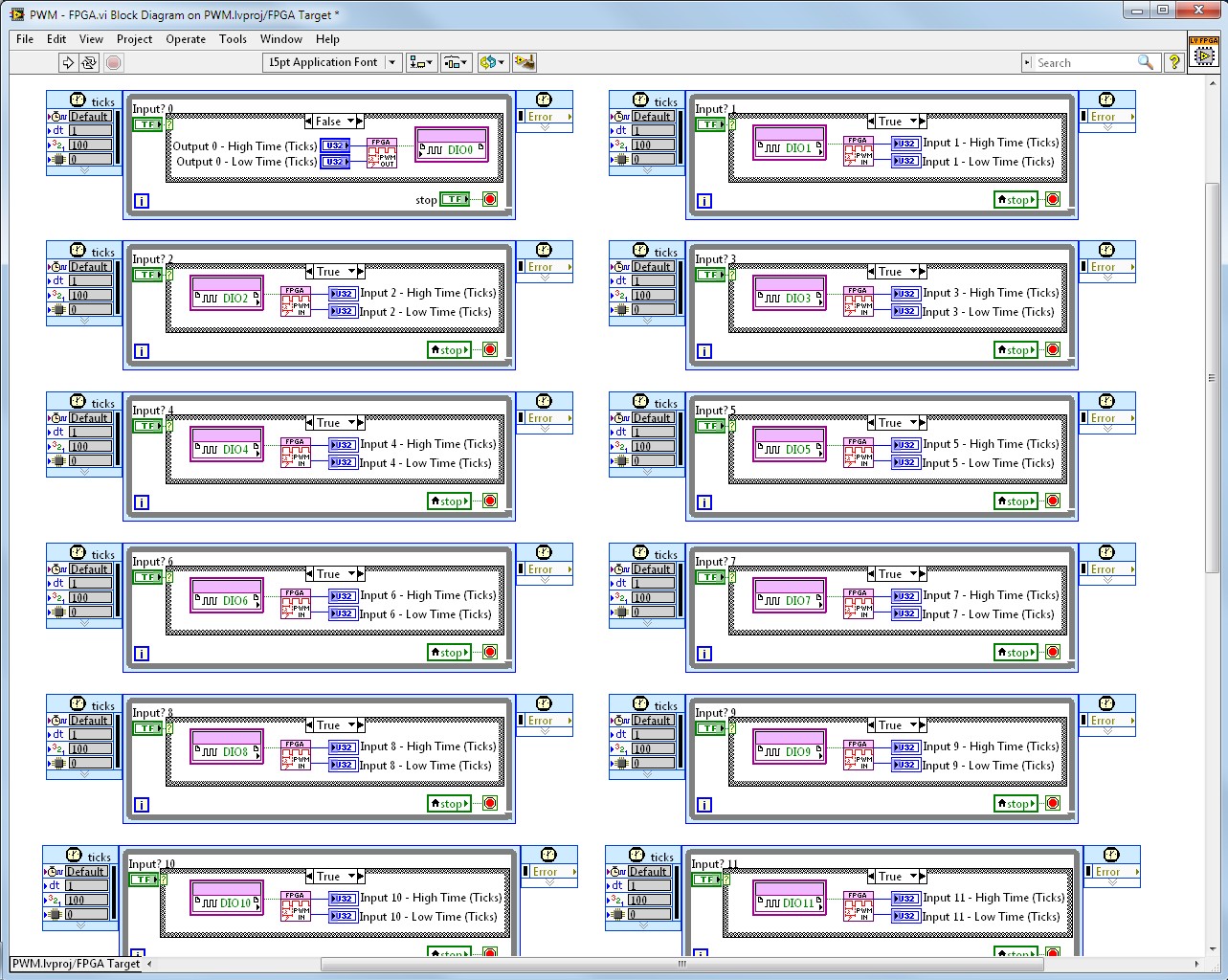 For PWM input, a digital line is monitored at the rate of the FPGA clock (40 MHz in this case). The FPGA code counts the number of ticks (also known as clock pulses) that occur during both the low time and high time of the incoming signal. Those values are stored on the FPGA in the Low Period and High Period numeric indicators. These values can then be read by the host VI, which resides on the user’s computer. This is discussed in more detail in the upcoming sections.

For PWM output, the FPGA code is also run at the rate of the FPGA clock. The user provides the FPGA with the number of ticks desired for a high time and low time. The FPGA will output and sustain high or low for the duration of ticks desired. 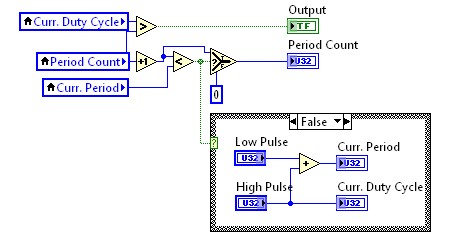 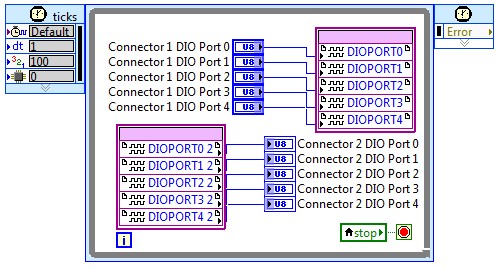 The LabVIEW host code acts as the user interface used to communicate with the FPGA. The host code interacts directly with the FPGA code by updating controls and reading from indicators on the front panel of the FPGA code. This functionality is supported by the NI-RIO driver.

1.      Open a reference to the FPGA bitfile on the R Series target.

2.      Use a Read/Write Node to update controls and indicators on the FPGA front panel. 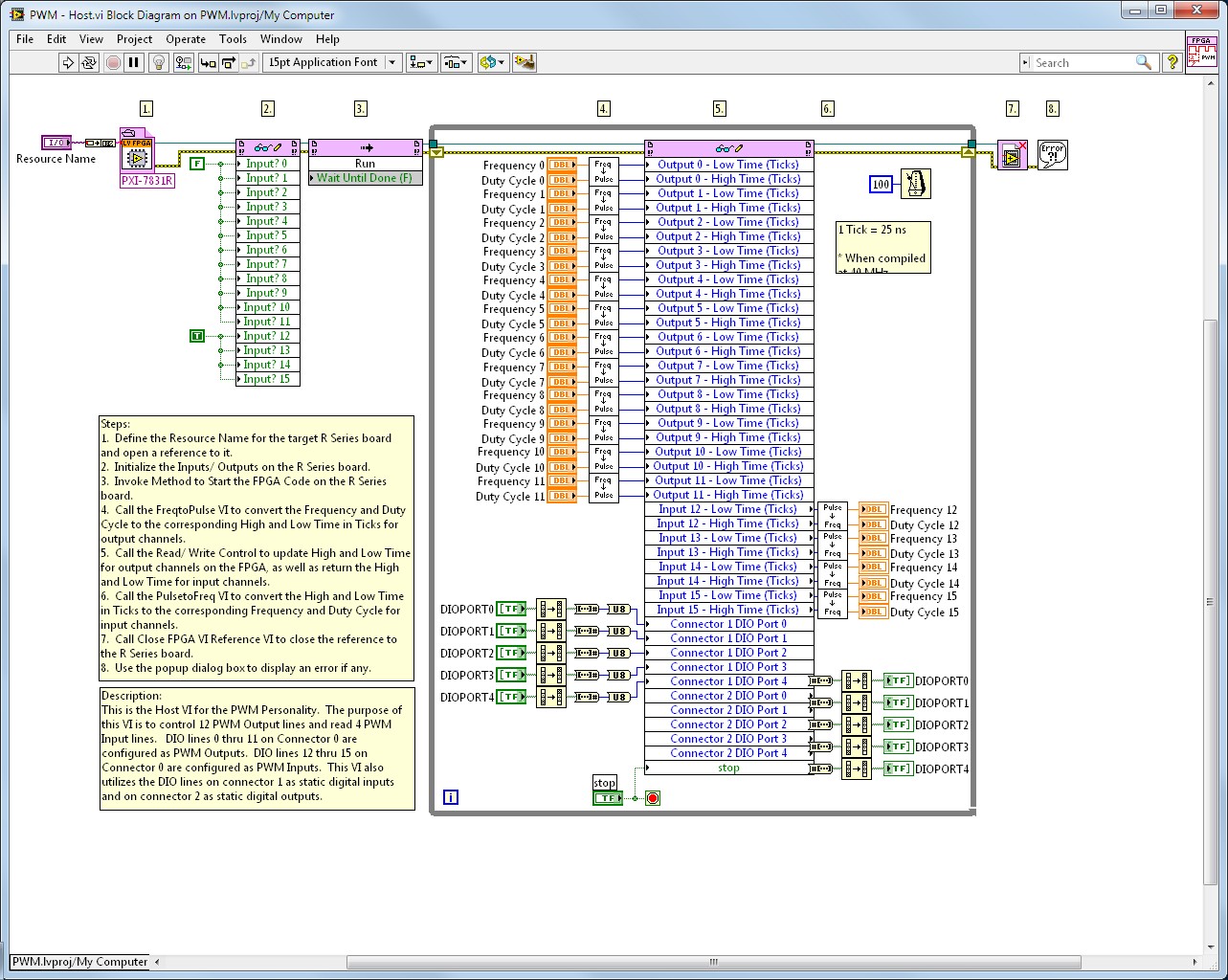 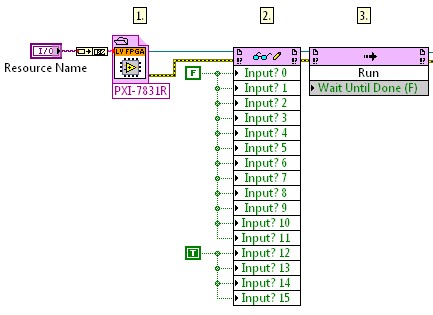 The first part of the code is the initialization stage. In this part, the resource name for the target R Series board is passed to the Open FPGA VI Reference. This function opens a reference to the board that can be used by any subsequent functions or subVIs that communicate with the FPGA. The reference is then passed to the Read/Write Node and the digital lines are initialized to function as an output or input. Finally, the Invoke Method Node is used to start the FPGA code on the R Series board.

For example, Output 0 – Low Time (Ticks) is the name of a control in the FPGA code. This particular control defines how many ticks DIO line 0 will output a low value. That control paired with Output 0 – High Time (Ticks) defines a PWM output channel (the high time and low time correlate to a frequency and duty cycle). Refer to Figure 1 to see these controls being used on the FPGA.

While LabVIEW FPGA supports fixed-point and floating-point data types, integer data types are the most efficient to use when it comes to consuming FPGA resources. For this reason, the data type written to the FPGA code is an integer (in this case it is a U32) and any division necessary is done on the host. The intermediate subVI, FreqtoPulse, converts the desired frequency and duty cycle for a PWM output channel to a low time and high time represented in ticks.

The final part of the host VI closes the reference to the R Series board. It also handles any errors that occurred during the execution of the host VI. 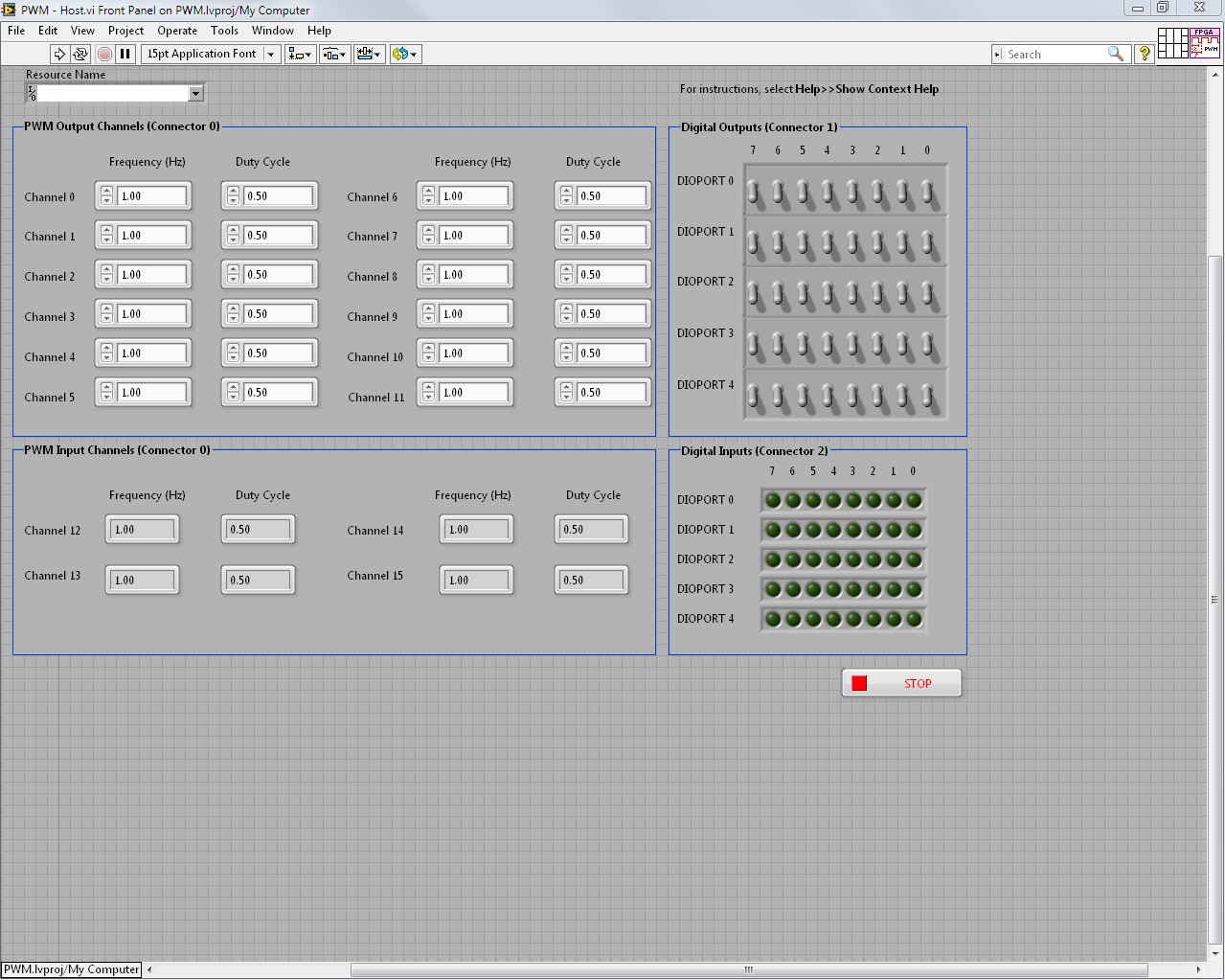 You can use this example personality for high-channel-count PWM. You do not need the LabVIEW FPGA Module to use this personality. However, you do need the module if you want to make any modifications to the FPGA code. The NI-RIO driver is the only driver necessary.