Today’s high-mix, low-volume production machines require smarter robots that can interact with their environment through measurements and vision. LabVIEW is enabling new applications for industrial robots by integrating measurements, vision, robot control and HMI into one, easy-to-use environment. With the ImagingLab Robotics Library for DENSO, you can make your robotics system smarter without the need for complex robotics programming expertise. Beyond flexible manufacturing, with the library you can integrate DENSO robotics into new types of systems and applications for automated test, laboratory automation and precision manufacturing.

To switch the robot into a slave state that you can control with NI LabVIEW software, you must load and start a DENSO program called robslave.pac, which comes with the DENSO b-CAP software on the robot controller. Use the DENSO software to download robslave.pac to the controller. After connecting to the controller, use the Denso-Robslave VI to start the program and to stop the program when exiting the LabVIEW application.

To control the DENSO robot with LabVIEW, you must turn the teaching pendant’s key to Auto and turn on the Enable Auto lines on the Safety I/O port. In addition, you must connect the Stop all Steps input of the min-I/O connection on the DENSO controller, or the step-stop line, to a 24 V supply. This can be an external 24 V power supply, or you can change the jumpers within the controller to have the 24 V be supplied internally. Refer to the DENSO manual for more information. 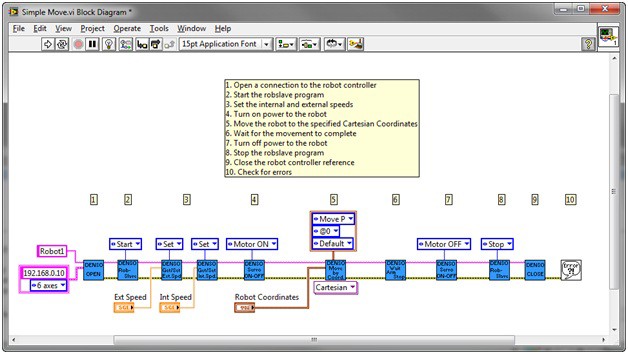 Connecting to the Robot Controller

The first step in programming a DENSO robotics application is the initialization of the robot and its parameters. Open a connection to the robot controller by using the Denso-Open VI and specifying the IP address of the controller and how many axes the robot has. To find the IP address of the robot’s controller, navigate to Settings»Communications Settings»Address on the DENSO teaching pendant. Note that you must add the IP address of the PC or real-time target connecting to the robot controller as a valid client in the robot’s communications setting menu as mentioned above. The Denso-Open VI options for number of axes are 6, 5, 4, and Undefined. You do not need to differentiate between different models of each robot that have the same number of axes. For example, you can run some programs written for a VS series six-axis robot using a VP series six-axis robot without changing any LabVIEW code.

You can set two different robot speed types within LabVIEW: external and internal. External speed is most often used to control the variations between moves once deployed. For instance, the robot may need to move at a slower speed while assembling a part, but it can move at a faster speed when returning to pick up another part. After the robot has placed the part or before it picks up a part, simply call the external speed VI to set the current desired speed. Internal speed is commonly used for testing purposes. If a test needs to be completed at 25 percent speed, you can set the internal speed at 25 and all the velocities across the robot’s movements are scaled back to 25 percent of their value. Otherwise, you need to go into the code and set each speed to be 25 percent of its original value. This can be tedious because some applications require a large variety of speeds for various movements. For safety, set the internal and external speeds after starting robslave.pac to ensure the robot moves at the correct speed each time you run the program.

With DENSO robots, the user can set the current tool, or end effector, which is attached to the end of the robot. With this feature, changing the end effector does not require a complete change in programmed positions. Instead, this feature automatically offsets the movements to reach the same target position based on the parameters of the end effector being used. The coordinate system, or work area, defines the absolute positions when commanding the robot using Cartesian and Trans coordinates. The ImagingLab Robotics Library for DENSO allows the user to set and edit the current tool and work area as well as add new tools and work areas using the VIs shown in the screenshots below. These screenshots show how to set the current tool/work and new values for a specific tool/work, but you can change the input from Set to Get to return the current values and settings.

Continue on to the following paper to learn how you can program a single point movement using the ImaginaLab Robotics Library for DENSO.