This document provides information to help you understand basic pressure concepts and how different pressure sensors work. You can choose from a variety of sensors, which each have its own operating principles, benefits, considerations, and drawbacks.

A pressure measurement can be described as either static or dynamic. The pressure in cases with no motion is static pressure. Examples of static pressure include the pressure of the air inside a balloon or water inside a basin. Often, the motion of a fluid changes the force applied to its surroundings. For example, say the pressure of water in a hose with the nozzle closed is 40 pounds per square inch (force per unit area). If you open the nozzle, the pressure drops to a lower value as you pour out water. A thorough pressure measurement must note the circumstances under which it is made. Many factors including flow, compressibility of the fluid, and external forces can affect pressure.

How do pressure sensors work?

Of all the pressure sensors, Wheatstone bridge (strain based) sensors are the most common because they offer solutions that meet varying accuracy, size, ruggedness, and cost constraints. Bridge-based sensors can measure absolute, gauge, or differential pressure in both high- and low-pressure applications. They use a strain gage to detect the deformity of a diaphragm subjected to the applied pressure. 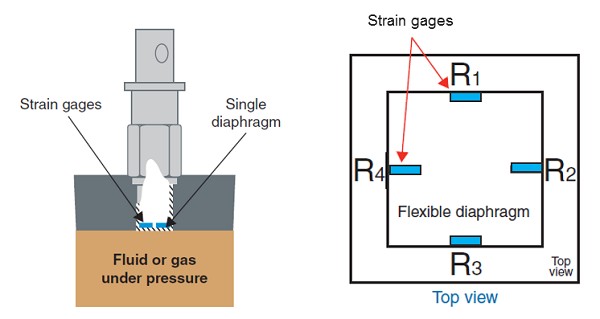 How to choose the right type of pressure sensor