LabVIEW software contains powerful debugging tools to help you identify problem areas in your code so you can make the appropriate changes. You may encounter two general types of software bugs: those that prevent the program from running and those that generate bad results or incorrect behavior. This module teaches you how to identify and troubleshoot both types of errors.

If LabVIEW cannot run your VI, it informs you by changing the run arrow to a broken icon, and the Error List window lists the specific reasons why the VI is broken. The second type of bug is typically harder to track down, but LabVIEW has several tools you can use to watch your code as it executes, which makes the process much easier.

If a VI does not run, it is a broken, or nonexecutable, VI. The Run button appears broken when the VI you are creating or editing contains errors.

Generally, this means that a required input is not wired, or a wire is broken. Press the broken Run button to access the Error List window. The Error List window lists each error and describes the problem. You can double-click an error to go directly to the error.

Warnings do not prevent you from running a VI. They are designed to help you avoid potential problems in VIs. Errors, however, can break a VI. You must resolve any errors before you can run the VI.

Click the broken Run button or select View»Error List to find out why a VI is broken. The Error List window lists all the errors. The Items with Errors section lists the files that have errors. If two or more items have the same name, this section shows the specific application instance for each item. The Errors and Warnings section lists the errors and warnings for the VI you select in the Items with Errors section. The Details section describes the errors and, in some cases, recommends how to correct the errors. Click the Help button to display a topic in the LabVIEW Help that describes the error in detail and includes step-by-step instructions for correcting the error.

Click the Show Error button or double-click the error description to highlight the area on the block diagram or front panel that contains the error. 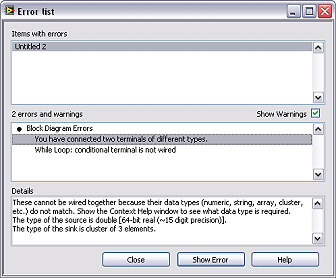 The following list contains common reasons why a VI is broken while you edit it:

If your VI runs but produces incorrect results then you have a functional error in your code. LabVIEW has several tools to help you analyze where your VI is not behaving as expected.

Note: Execution highlighting greatly reduces the speed at which the VI runs.

Figure 2. Example of Execution Highlighting in Use

Click the Retain Wire Values button to save the wire values at each point in the flow of execution so that when you place a probe on the wire you can immediately retain the most recent value of the data that passed through the wire. You must successfully run the VI at least once before you can retain the wire values.

Click the Step Over button to execute a node and pause at the next node. You also can press the <Ctrl> and right arrow keys. By stepping over the node, you execute the node without single-stepping through the node.

Click the Step Out button to finish executing the current node and pause. When the VI finishes executing, the Step Out button is dimmed. You also can press the <Ctrl> and up arrow keys. By stepping out of a node, you complete single-stepping through the node and navigate to the next node.

The Warning button appears if a VI includes a warning and you placed a checkmark in the Show Warnings checkbox in the Error List window. A warning indicates a potential problem with the block diagram, but it does not stop the VI from running.

Use the Probe tool to check intermediate values on a wire as a VI runs.

Use the Probe tool if you have a complicated block diagram with a series of operations, any one of which might return incorrect data. Use the Probe tool with execution highlighting, single-stepping, and breakpoints to determine if and where data is incorrect. If data is available, the probe immediately updates and displays the data in the Probe Watch Window during execution highlighting, single-stepping, or when you pause at a breakpoint. When execution pauses at a node because of single-stepping or a breakpoint, you also can probe the wire that just executed to see the value that flowed through that wire.