A string is a sequence of displayable or nondisplayable ASCII characters. Strings provide a platform-independent format for information and data. Some of the more common applications of strings include the following:

On the front panel, strings appear as tables, text entry boxes, and labels. LabVIEW includes built-in VIs and functions you can use to manipulate strings, including formatting strings, parsing strings, and other editing. LabVIEW represents string data with the color pink.

Note: The difference among the numeric data types is the number of bits they use to store data and the data values they represent.

Certain data types also provide extended configuration options. For example, you can associate physical units of measure with floating-point data, including complex numbers, and you can configure the encoding and range for fixed-point data.

LabVIEW stores Boolean data as 8-bit values. You can use a Boolean in LabVIEW to represent a 0 or 1, or a TRUE or FALSE. If the 8-bit value is zero, the Boolean value is FALSE. Any nonzero value represents TRUE. Common applications for Boolean data include representing digital data and serving as a front panel control that acts as a switch that has a mechanical action often used to control an execution structure such as a Case structure. A Boolean control is typically used as the conditional statement to exit a While Loop. In LabVIEW, the color green represents Boolean data.

Most Express VIs accept and/or return the dynamic data type, which appears as a dark blue terminal.

Using the Convert to Dynamic Data and Convert from Dynamic Data VIs, you can convert floating-point numeric or Boolean data of the following data types:

Wire the dynamic data type to an indicator that can best present the data. Indicators include a graph, chart, or numeric, or Boolean indicator. However, because dynamic data undergoes an automatic conversion to match the indicator to which it is wired, Express VIs can slow down the block diagram execution speed.

An array consists of elements and dimensions. Elements are the data points that make up the array. A dimension is the length, height, or depth of an array. An array can have one or more dimensions and as many as (231)—1 elements per dimension, memory permitting.

You can build arrays of numeric, Boolean, path, string, waveform, and cluster data types. Consider using arrays when you work with a collection of similar data points and when you perform repetitive computations. Arrays are ideal for storing data you collect from waveforms or data generated in loops, where each iteration of a loop produces one element of the array.

Note: Array indexes in LabVIEW are zero-based. The index of the first element in the array, regardless of its dimension, is zero.

Array elements are ordered. An array uses an index so you can readily access any particular element. The index is zero-based, which means it is in the range of 0 to n-1, where n is the number of elements in the array. For example, n-12 represents the 12 months of the year, so the index ranges from 0 to 11. March is the third month, so it has an index of 2.

Figure 2. Placing a Numeric Control in an Array Shell

You must insert an object in the array shell before you use the array on the block diagram. Otherwise, the array terminal appears black with an empty bracket and has no data type associated with it.

The previous examples use 1D arrays. A 2D array stores elements in a grid. It requires a column index and a row index to locate an element, both of which are zero-based. Figure 3 shows an 8 column by 8 row 2D array, which contains 8 × 8 = 64 elements.

To add a multidimensional array to the front panel, right-click the index display and select Add Dimension from the shortcut menu. You also can resize the index display until you have as many dimensions as you want.

If you wire an array to or from a For Loop or While Loop, you can link each iteration of the loop to an element in that array by enabling auto-indexing. The tunnel image changes from a solid square to the image to indicate auto-indexing. Right-click the tunnel and select Enable Indexing or Disable Indexing from the shortcut menu to toggle the state of the tunnel. 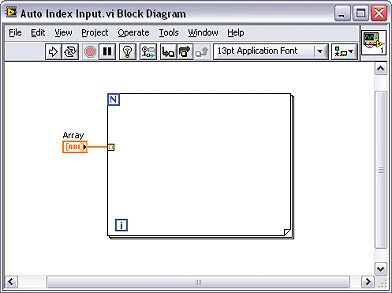 If you enable auto-indexing for more than one tunnel or if you wire the count terminal, the actual number of iterations becomes the smaller of the choices. For example, if two auto-indexed arrays enter the loop, with 10 and 20 elements respectively, and you wire a value of 15 to the count terminal, the loop still executes only 10 times, indexing all elements of the first array but only the first 10 elements of the second array.

When you auto-index an array output tunnel, the output array receives a new element from every iteration of the loop. Therefore, auto-indexed output arrays are always equal in size to the number of iterations.

Right-click the tunnel at the loop border and select Enable Indexing or Disable Indexing from the shortcut menu to enable or disable auto-indexing. Auto-indexing for While Loops is disabled by default.

For example, disable auto-indexing if you need only the last value passed out of the tunnel.

Clusters group data elements of mixed types. An example of a cluster is the LabVIEW error cluster, which combines a Boolean value, a numeric value, and a string. A cluster is similar to a record or a struct in text-based programming languages.

Bundling several data elements into clusters eliminates wire clutter on the block diagram and reduces the number of connector pane terminals that subVIs need. The connector pane has, at most, 28 terminals. If your front panel contains more than 28 controls and indicators that you want to pass to another VI, group some of them into a cluster and assign the cluster to a terminal on the connector pane.

Figure 9. Creation of a Cluster Control

Figure 10 is an example of a cluster containing three controls: a string, a Boolean switch, and a numeric.

Use the Cluster functions to create and manipulate clusters. For example, you can perform tasks similar to the following:

Use the Bundle function to assemble a cluster from individual elements or to change the values of individual elements in an existing cluster without having to specify new values for all elements. Use the Positioning tool to resize the function or right-click an element input and select Add Input from the shortcut menu.

Figure 11. Assembling a Cluster on the Block Diagram

If you wire the cluster input, you can wire only the elements you want to change. For example, the Input Cluster shown in Figure 12 contains three controls.

If you know the cluster order, you can use the Bundle function to change the Command value by wiring the elements shown in Figure 12.

Figure 13. Bundle by Name Used to Modify a Cluster

Use the Unbundle function to split a cluster into its individual elements.

Use the Unbundle by Name function to return the cluster elements whose names you specify. The number of output terminals does not depend on the number of elements in the input cluster.

For example, if you use the Unbundle function with the cluster in Figure 14, it has four output terminals that correspond to the four controls in the cluster. You must know the cluster order so you can associate the correct Boolean terminal of the unbundled cluster with the corresponding switch in the cluster. In this example, the elements are ordered from top to bottom starting with element 0. If you use the Unbundle by Name function, you can have an arbitrary number of output terminals and access individual elements by name in any order.

Figure 14. Unbundle and Unbundle by Name

An enum (enumerated control, constant or indicator) is a combination of data types. An enum represents a pair of values, a string and a numeric, where the enum can be one of a list of values. For example, if you created an enum type called Month, the possible value pairs for a Month variable are January-0, February-1, and so on through December-11. Figure 15 shows an example of these data pairs in the Properties dialog box for an enumerated control. This is directly accessed by right-clicking the enum control and selecting Edit Items.

Use the Probe tool to check intermediate values on a wire as a VI runs.

Use the Probe tool if you have a complicated block diagram with a series of operations, any one of which might return incorrect data. Use the Probe tool with execution highlighting, single-stepping, and breakpoints to determine if and where data is incorrect. If data is available, the probe immediately updates and displays the data in the Probe Watch Window during execution highlighting, single-stepping, or when you pause at a breakpoint. When execution pauses at a node because of single-stepping or a breakpoint, you also can probe the wire that just executed to see the value that flowed through that wire.