Introduction to the NI LabWindows™/CVI™ Run-Time Module for Linux® 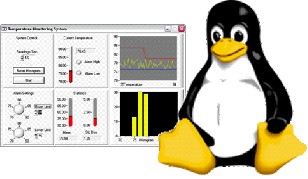 The LabWindows/CVI 2010 Run-Time Module for Linux supports the following distributions:

This support is provided for 32-bit, x86 platforms only.

Visit ni.com/linux to review the distributions supported by National Instruments.

The following commands are available:

The following additional arguments are available:

For more information about the cvicc command, refer to the Building a Linux Application help topic.

Q: Where is the documentation installed on Linux?
The readme.txt is installed under <installdir>/natinst/cvi2013. The readme provides installation instructions as well as information about building LabWindows/CVI projects and known issues. Use a Web browser to view the LabWindows/CVI Run-Time Module for Linux Help at <InstallDir>/natinst/cvi2013/help/index.htm. The documentation includes a reference for supported functions on Linux.

LabWindows/CVI continues a history of innovation with the new LabWindows/CVI Run-Time Module for Linux that helps ANSI C programmers create stable test and measurement applications that run on Windows and Linux targets using a variety of commercial off-the-shelf (COTS) hardware.

Linux® is the registered trademark of Linus Torvalds in the U.S. and other countries. Tux penguin is courtesy of Larry Ewing.