This document describes the changes to AVI codec support in NI Vision starting with Vision Development Module 2012 SP1 and Vision Acquisition Software February 2013. In general, users can build and read AVI video files through NI Vision. The changes to AVI implementation in NI Vision provide improved 64-bit functionality, support for more codecs, and RT target compatibility. The functions and VIs that represent this change are labeled as "AVI2" to differentiate them from the old AVI implementation.

AVI (Audio Video Interleave) is a widely-used multimedia container format commonly used to package videos. With AVI, video data can be encoded or decoded with any number of codecs. These codecs translate the video data to compress it and optimize it for certain uses. The user who builds the AVI file can choose which codec to apply depending on what the intended use of the video is. Through NI Vision products, a user is able to create and read AVI files, and that functionality has been expanded to support more codecs and more devices. As a result of this new implementation, the functions and VIs for AVI have been renamed. They are now labeled "AVI2" to distinguish from older AVI functions and VIs.

NI's AVI2 implementation recognizes codecs instead of filters. On Windows the user now has access to any codec on the system that is compatible with Microsoft's Video Compression Manager. In addition, previously many codecs could not be used on Windows 64-bit machines. Because the AVI2 implementation uses Microsoft's Video Compression Manager, many of these codecs are now accessible on Windows 64-bit machines. Finally, on both Windows machines and compatible Real-Time (RT) targets, NI provides the following four codecs: FF Video Codec 1, Motion JPEG, Y800 Uncompressed, and YUV 4:2:0 Planar. The guaranteed presence of these codecs allows for portability of AVI files built from AVI2 functions.

Through AVI2, on Windows any codec that is compatible with Microsoft's Video Compression Manager is available to the user. This means that the codecs recognized by Windows are recognized by NI Vision products as well.

In addition, on any system that supports AVI2 (both Windows and Real-Time), the following codecs are packaged with Vision Development Module and Vision Acquisition Software. You will see these codecs on every machine with AVI2 functions installed.

Note that the Quality input in IMAQ AVI2 Create.vi is only implemented for Windows codecs, and is not available for these four codecs that install with NI Vision.

To use LabVIEW to see which codecs are available on a machine, run IMAQ AVI2 Get Codec Names.vi, which is located in the Functions palette under Vision and Motion»Vision Utilities»Files»AVI. Note that the native codecs are labeled with "(NI Vision)" as seen in Figure 1 below. 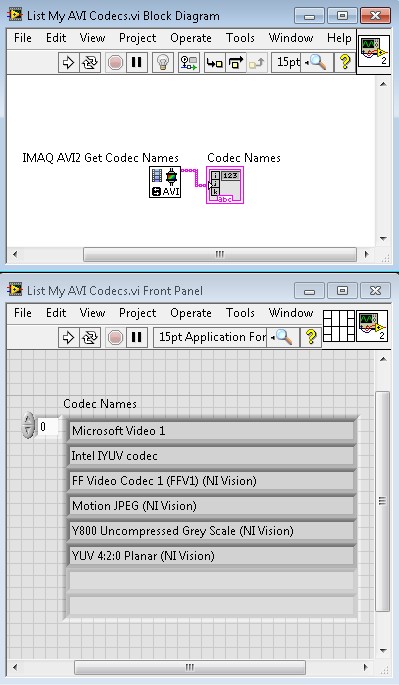 With AVI2, certain Real-Time targets can now create and read AVI video files. These targets include the Embedded Vision System (EVS) and the 177x line of NI Smart Cameras.

AVI2 is not available for the following devices:

The new VIs are still in the same location on the Functions palette: Vision and Motion >> Vision Utilities >> File >> AVI, as seen in Figure 2 below. 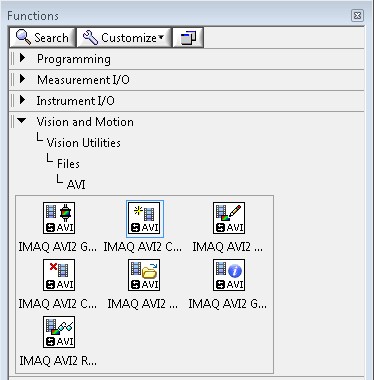 All of the old VIs are still available as part of the NI Vision installations. Both the new and the old AVI functions are located in <LabVIEW>\vi.lib\vision. Within that, the libraries are as follows.

How to Use the AVI Functions in LabVIEW