This document provides information to help you understand fundamentals of load and torque measurements and how different sensor specifications impact load cell or torque sensor performance in your application.

What are force, load, and torque?

Load is a term frequently used to refer to the force exerted on a structure or body. The SI-recognized unit for force or load is the Newton (N). Load cells directly measure force or weight. These transducers convert mechanical force into electrical signals by measuring deformations produced by the force or weight. A common application of these devices is measuring dry or liquid materials in a hopper. A measure of the weight through a load cell yields a measure of the quantity of the material in the hopper.

Figure 1. Load cells are used to measure force or weight.

Torque is the tendency of a force to rotate an object about an axis. Similar to force being described as push or pull, torque can be described as a twist to an object. The recognized SI unit of measure for torque is Newton-meters (Nm). Using a simple definition, torque is equivalent to force times distance, where a clockwise torque or twist is usually positive and a counter-clockwise torque is usually negative. Torque sensors are composed of strain gages that are affixed to a torsion bar. As the bar turns, the gages respond to the bar’s sheer stress, which is proportional to the torque. 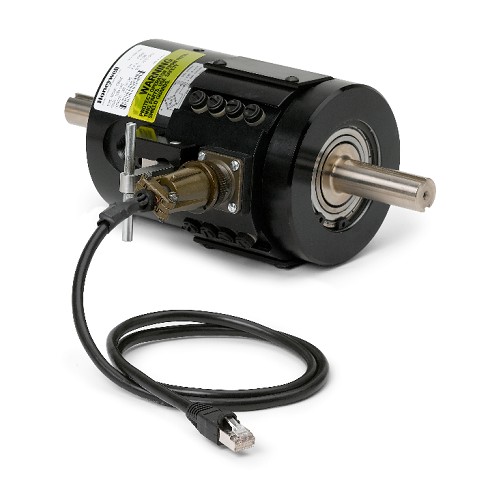 How do load cells work?

The many different types of load cells operate in different ways, but the most commonly used load cell is the strain gage load cell. In general, you use a beam or yoke assembly that has several strain gages mounted in a Wheatstone bridge configuration so that the application of a force causes a strain in the assembly the strain gages are measuring. Generally, these devices are calibrated so that the force is directly related to the resistance change. Less commonly used pneumatic and hydraulic load cells translate force into pressure measurements. When force is applied to one side of the piston or diaphragm, the amount of pressure (pneumatic or hydraulic) applied to the other side to balance that force is measured. This rest of this white paper focuses on strain gage or bridge-based load cells.

The most critical mechanical component of a load cell or strain gage transducer is the structure (spring element). The structure reacts to the applied load and focuses that load into an isolated, uniform strain field where strain gages can be placed for load measurement. The three common load cell structure designs—multiple-bending beam, multiple column, and shear web—form the basic building blocks for all possible load cell profiles and/or configurations.

Multiple-bending beam load cells are low capacity (20 to 22K N) and feature a wheel-shaped spring element that is adaptable to low-profile transducers. It contains four active gages or sets of gages per bridge arm, with pairs subjected to equal and opposite strains (tension and compression).

Multiple-column load cells consist of multiple columns for higher capacity (110K to 9M N). In this arrangement, each bridge arm contains four active strain gages, with two aligned along the principal axis of strain and the other two in the traverse direction to compensate for Poisson’s effect.

Shear-web load cells have a medium capacity (2K to 1M N) and use a wheel form with radial webs subject to direct shear. The four active strain gages per bridge arm are bonded to the sides of the web, 45 deg to the axis of the beam.

How do I choose the right load cell?

Load cells operate in two basic modes: the compression mode, during which the weighing vessel sits on one or more load cells, or the tension mode, during which the weighing vessel hangs from one or more load cells. You can design the different load cell structure configurations discussed in the previous section using any of these configurations for compression-only forces, or you can design them to measure both a tension and compression force.

Beyond the principal measurement, you select a load cell primarily based on capacity, accuracy, and physical mounting constraints or environmental protection. You cannot determine expected performance by any one factor. You must pinpoint it through a combination of different sensor parameters and the way you designed the load cell into your system. Refer to the table to compare the range, accuracy, sensitivity, and price of different load cell types.

Capacity. Define your minimum and maximum capacity requirements. Be sure to select the capacity over the maximum operating load and determine all extraneous load and moments before selecting a load cell. The load capacity must be capable of supporting the following:

Physical and environmental constraints. One of the key characteristics to consider is how you are integrating the load cell into your system. Identify any physical restrictions that limit size (width, height, length, and so on) or the way the load cell can be mounted. Most tension and compression load cells feature center female threads on top and bottom for fixturing, but they also may have male threads or a mixture of both. Consider how the system will operate and what the worst-case operating conditions may be—the widest temperature range, the smallest weight change required to be measured, the worst environmental conditions (flood, tempest, seismic activity), and the maximum overload conditions.

How do torque sensors work?

Reaction torque is the turning force, or moment, imposed on the stationary portion of a device by the rotating portion as power is delivered or absorbed. If the load source is held rigid while the drive source is trying to rotate, the torque is sensed. Reaction torque sensors are restrained so they cannot rotate 360 deg without the cable wrapping up because the housing or cover is fixed to the sensor element. These sensors are commonly used to measure torque of a back-and-forth agitating type motion. Because these sensors do not use bearings, slip rings, or any other rotating elements, their installation and use can be very cost-effective.

Rotating torque sensors are similar in design and application to reaction torque sensors except that the torque sensor is installed in line with the device under test. Since the shaft of a torque sensor is rotating 360 deg, these sensors must have a way to transfer the signals from the rotational element to a stationary surface. You can accomplish this by using slip rings, rotary transformers, or telemetry. 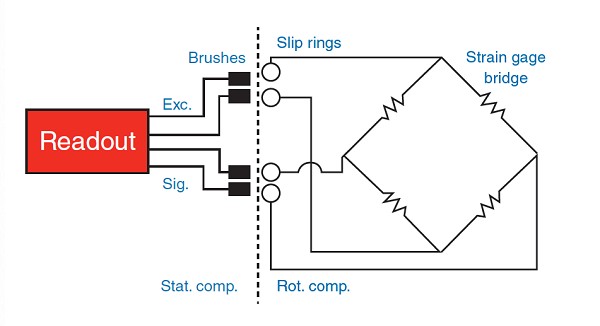 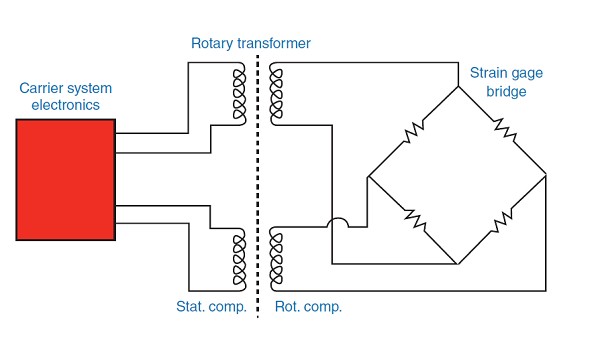 Figure 4. Two transformers are used - one to transmit the excitation signal and the other to transfer the bridge output signal. [1]

How do I choose the right torque sensor?

Similar to your load cell selections, your torque sensor selections primarily depend on your capacity needs and physical or environmental requirements.

Capacity. To select the correct capacity, determine the minimum and maximum torque you expect. Extraneous torque and moments can increase the combined stress, which accelerates fatigue and affects sensor accuracy and performance. Any load other than torque, such as axial, radial, or bending, is considered extraneous and should be determined beforehand. If you cannot arrange your installation to minimize the effects of these loads, consult the sensor documentation to verify that the extraneous loads are within the sensor’s ratings.

Physical and environmental requirements. Evaluate any physical constraints (length, diameter, and so on) and the way the torque sensor can be mounted in your system. Consider what type of environment the sensor will be operating in to ensure proper performance across wide temperature ranges, humidity, or contaminants (oil, dirt, dust).

Revolutions per minute (rpm). For rotary torque sensors, you need to understand how long the torque sensor will be rotating and at what speed to determine the RPM.

Load and torque sensors can be either conditioned or nonconditioned. You can connect conditioned sensors directly to a DAQ device because they contain the required components for filtering, signal amplification, and excitation leads along with the regular circuitry for measurement. If you are working with nonconditioned sensors, you must consider several signal conditioning elements to create an effective bridge-based load and torque measurement system. You many need one or more of the following:

To learn how to compensate for these errors and review other hardware considerations for bridge-based load and torque measurements, download the Engineer's Guide to Accurate Sensor Measurements.