High-performance power supplies are crucial to the operation of circuits where voltages must be reliable.  The low dropout regulator (LDO) is one example of this type of power supply. An LDO’s ability to regulate load transients is a critical specification to measure its performance.

First, this document outlines the challenges of measuring load transient regulation, due to the need for high-speed current pulses that test equipment struggles to meet. Then, it details the steps taken to design a circuit to solve those challenges, and to measure load regulation in NI InstrumentStudio with the help of the Soliton LDO Measurement Suite Add-on.

Modern LDO’s have load transient regulation specifications for voltage droop max for a given current pulse at a given slew rate. This can cause challenges for test setup for this specification, given the high-speed current pulses that modern LDOs specify against. Finding test equipment to meet this challenge can be difficult.

Off-the-shelf power supplies or even precision SMUs have limitations to their ability to create a controlled slew rate current pulse. When off-the-shelf equipment that can meet these current pulse specifications is not available, turning to a custom circuit may be an option.

Described in the following section is an example circuit that can improve upon the capabilities of most power supplies and meet many of these challenging load current transient specifications.

This reference circuit primarily comprises an op amp, a power MOSFET, and a linear regulator.  An NI arbitrary waveform generator provides a pulse to control the flow of current through the MOSFET. This allows for the creation of a fast-changing pulse load.  Using different arbitrary waveforms allows the customization of pulse loads with varying amplitudes, duration, and rise/fall times. 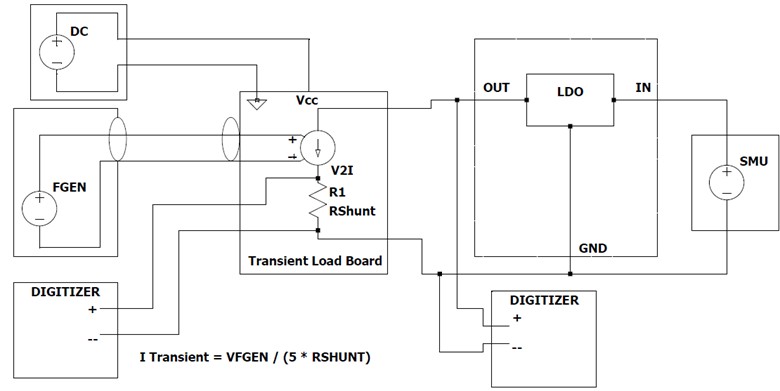 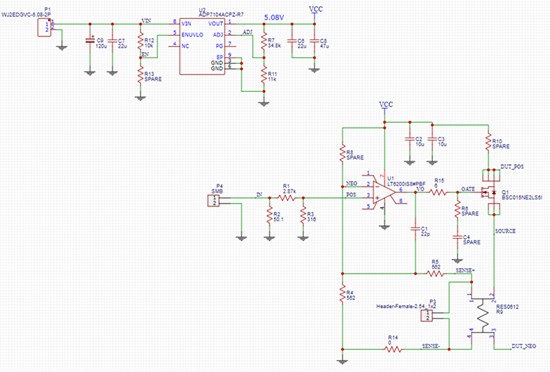 The op amp in this circuit, U1, is a high-speed op amp used to control the gate voltage of the MOSFET responsible for regulating the load current of the LDO. It is important that the op amp has a high bandwidth (165MHz in our case) to provide fast load current slew rates, as well as a high output current (60mA in our case) to drive the MOSFET capacitance. A linear regulator provides a fast, stable power source to the op amp Vcc, and the (optional) circuit comprising R5, R4, and C1 provides stability to keep the op amp output from oscillating.

The MOSFET controls the load current based on the gate voltage supplied from the output of the op amp. The MOSFET is a power-MOSFET operating in linear mode, meaning that it is operating in its saturation region as shown in the graph below: 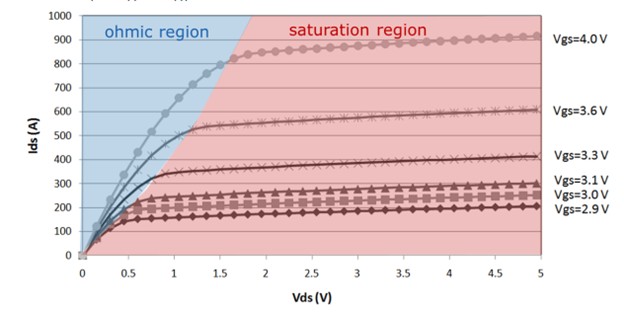 The 4-terminal resistor R9 is used as a current sense resistor. The value for this resistor can be tuned to balance between power dissipation and voltage signal fed back to the op amp. A larger resistance value will increase Vsense and maximize the signal-to-noise ratio, while a smaller resistance value will minimize power dissipation and self-heating.  The power dissipation can also be controlled by tuning the duty cycle of load transient current pulses. This will minimize the average current through the MOSFET and current sense resistor.

The resistor R10 is an optional resistor to allow bias current to flow through the MOSFET. This will keep it biased ON to allow the MOSFET to respond more quickly to a current pulse without adding load current to the DUT itself. This is for the case where a load pulse for the transient test starts from 0A, which normally introduces a delay on the order of 100ns for the op-amp to turn on the transistor and respond to the pulse. By adding R10 and setting it to bias at 5-10mA, the transistor will be kept on and will respond immediately. 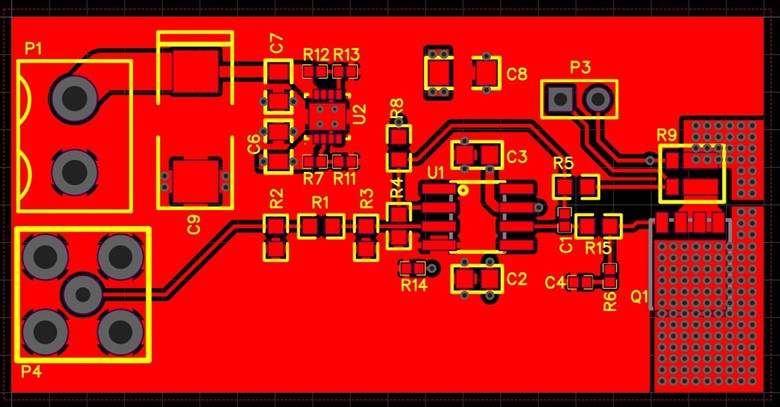 Board layout of circuit

For the PCB design, it’s important to follow guidelines for high-speed circuits.  Some suggestions and details for designing a board layout are given below:

Below are a couple of examples of pulse loads that can be created with this circuit.  The blue trace shows the AWG’s output voltage, while the yellow shows the voltage across a 20mOhm shunt resistor (load current from LDO). 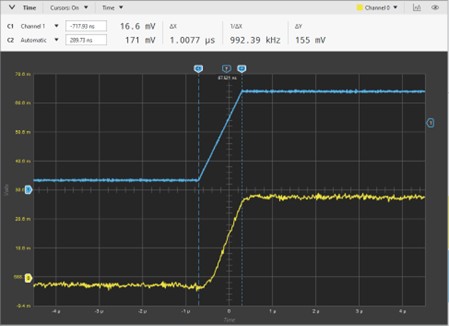 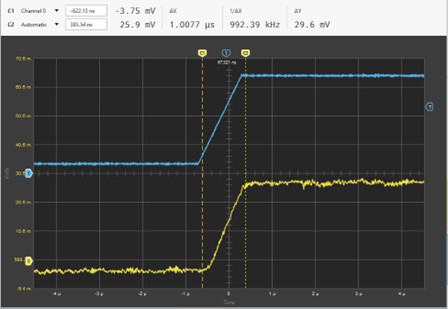 By creating an arbitrary waveform which steps the output voltage ~150mV over 1us, we were able to step the load current ~1.5A/1us. 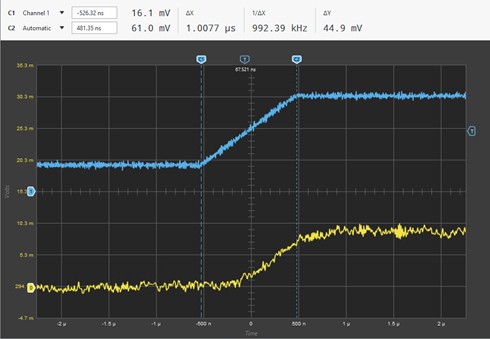 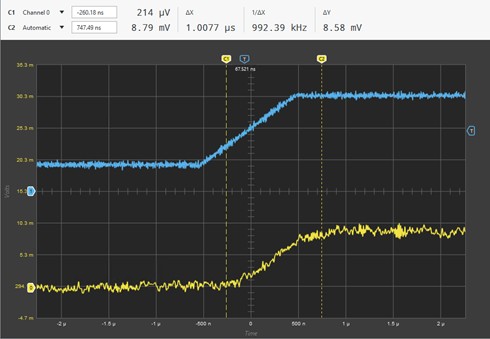 In addition to the circuit component power limitations, this circuit has the following performance limitations:

For any additional test circuit details or information, please reach out to NI support.

The Soliton LDO Measurement Suite contains pre-built measurements for line/load regulation, line/load transient, power supply rejection ratio (PSRR), and dropout voltage, with options for implementing additional measurements through Soliton engineering engagement.  The intuitive InstrumentStudio panel allows for interactive operations and debugging, as well as the ability to export measurement and instrument configurations for a simplified path to automation.  Below we’ll demonstrate how to use the panel to configure and perform a load transient test using the load transient reference circuit. 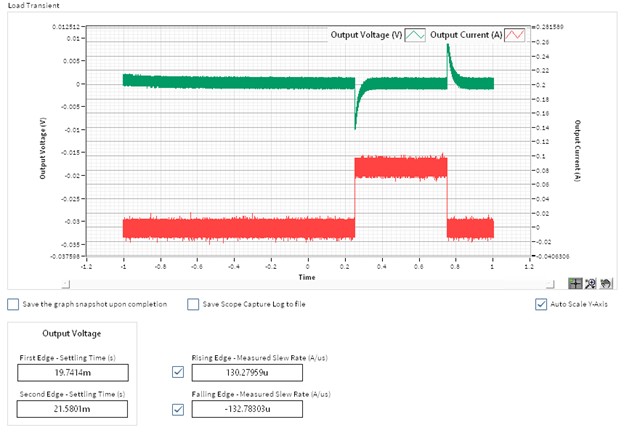 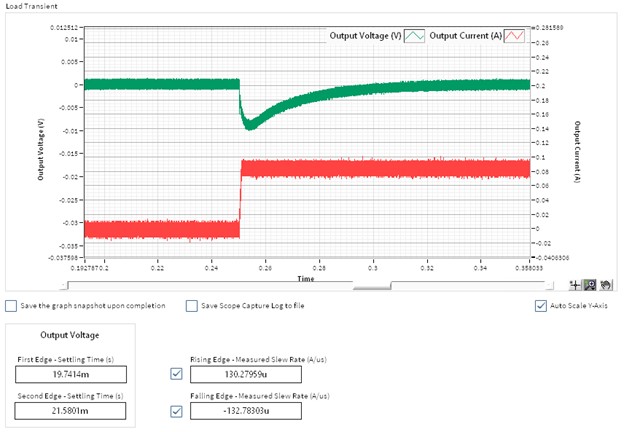