EPICS also implements a client/server architecture. Channel Access Servers (CA Servers) can act as real world I/O points through the use of Input/Output Controllers (IOCs). CA Servers publish data to and read data from the network as an EPICS Process Variable (PV). In contrast, Channel Access Clients (CA Clients) monitor the network for updates to process variables. Examples of CA Clients include Human Machine Interfaces (HMI) and data analysis programs such as LabVIEW.

Figure 1 highlights the standard EPICS network block diagram. The network is open to having a theoretically infinite number of clients and servers, though this is practically limited by network bandwidth and available IP addresses. All connected devices take turns communicating on the network at high speeds using Channel Access protocol.

Developers have the power to integrate LabVIEW with EPICS systems through the use of the LabVIEW Shared Variable Engine (SVE) and LabVIEW EPICS I/O Servers.

The SVE installs with National Instruments software and is supported on both PC and real-time operating systems. The SVE runs on a National Instruments proprietary protocol called NI-Publish Subscribe Protocol (NI-PSP). Using NI-PSP, the Shared Variable Engine runs as a dedicated process and manages all updates to shared variables. Because the SVE is a dedicated process, shared variables remain online and active even when LabVIEW software is not running. For more information on shared variables and NI-PSP see the article Using the LabVIEW Shared Variable.

LabVIEW EPICS I/O Servers act as a plug-in to the Shared Variable Engine and function as the link between shared variables and the EPICS network. Shared variables are bound to an EPICS Process Variable while the I/O server handles updates to PVs. The I/O Server then publishes the PVs to the network using the Channel Access Network Protocol. The EPICS Server and Client I/O Servers are included in the Datalogging and Supervisory Control (DSC) Module and the Real-Time (RT) Module for LabVIEW. The EPICS Client I/O Server is also available for free on the NI website. 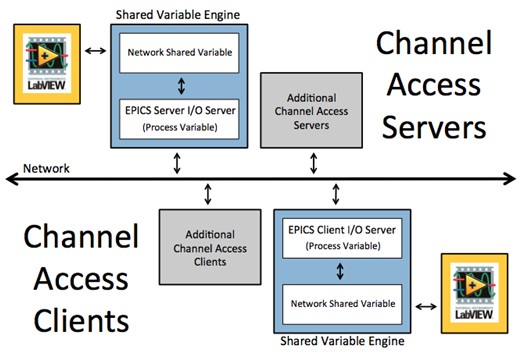