Increasingly strict emissions regulations for internal combustion engines require tighter control of combustion events. A multitude of factors define combustion events in an internal combustion engine. Air/fuel ratio, fuel stratification, injection timing, valve lift and duration, spark timing, and exhaust gas recirculation (EGR) all play a role in how the fuel burns in a cylinder. In many research engines, these factors have to be controlled and continuously adjusted between every engine cycle to ensure optimal combustion phasing and low emissions. With next-cycle control, engine researchers can target and control desired combustion parameters between successive combustion events even in engines where cycle-to-cycle variation can be great. Instead of spending time creating multidimensional calibration tables for all expected conditions, a researcher can spend more time observing desirable phenomena under controlled circumstances. Multiple national laboratories, universities, and research facilities across the globe are using this approach to research combustion strategies that can meet future fuel economy and emissions regulations. This document explains how next-cycle control works, why it is beneficial to research, and what tools are needed to implement it.

Today’s research engines employ a variety of combustion techniques, including spray-guided direct injection, homogeneous charge compression ignition (HCCI), spark-assisted HCCI, and reactivity controlled compression ignition. Free-piston engines are also receiving a lot of attention lately as a possible alternative to the conventional slider-crank design. Timing combustion events in these research engines can become tedious because pressure, temperature, and other parameters vary widely between engine cycles. Next-cycle control is the process of rapidly calculating crank-angle resolved cylinder pressure data and reducing it to single-point values for use in a control loop with enough time to adjust engine control parameters and command actuators for the next combustion event. Examples of single-point values used for next-cycle control include the location in crank angle degrees (CAD) of peak pressure or the location in CAD of 50 percent fuel mass fraction burned (CA50). 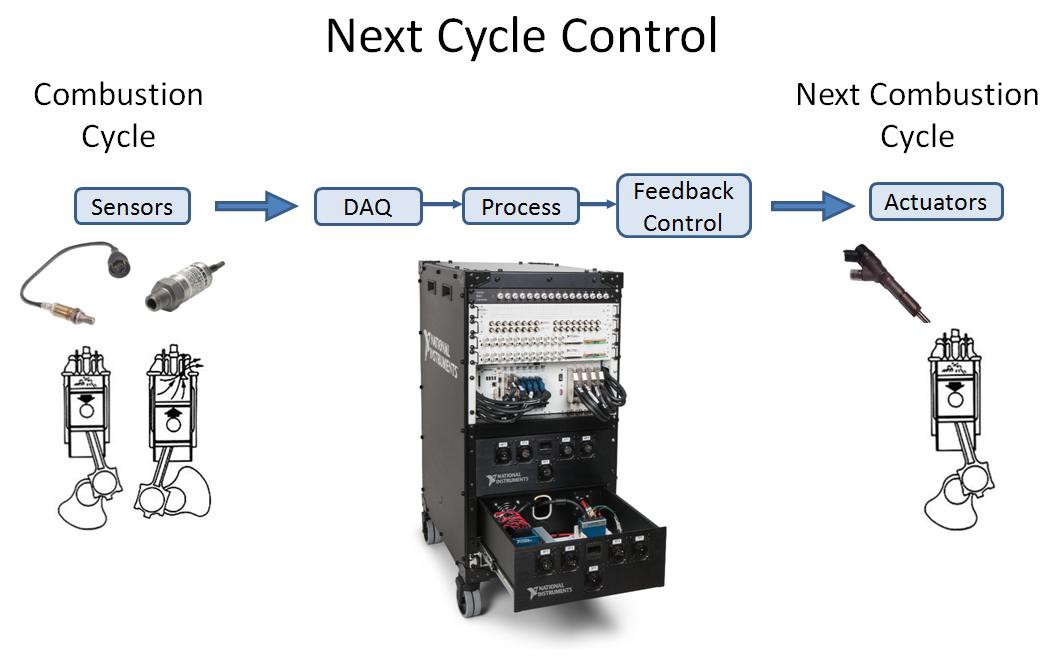 Figure 1. Next-cycle control gathers cylinder pressure data from one combustion event and then processes it in time to change engine actuators for the next combustion event.

These engine-specific calculations and data are computed using the NI Combustion Analysis System (NI CAS) Software. NI CAS Software is a LabVIEW plug-in for creating sophisticated in-cylinder combustion analysis and logging applications for engine research and development. It includes examples that engineers can use out of the box for building stand-alone systems or for modifying and integrating with engine control applications. Using NI CAS Software, engineers can streamline engine R&D by using built-in functions for next-cycle control.

With next-cycle control, certain combustion conditions (such as CA50) can be targeted and reliably controlled between every cycle of the engine. This is especially advantageous for research engines that use various ignition strategies because combustion can vary widely between two cycles if left uncontrolled. For example, in an HCCI engine, if one cycle burns hot, the next cycle could potentially burn sooner and hotter due to the latent heat from the previous cycle. If engine inputs are not immediately adjusted, each successive cycle burns earlier and hotter than the previous, eventually leading to engine knock and shutdown. This behavior is a common pitfall of many of the emerging low-temperature combustion strategies. Next-cycle control can eliminate this unwanted phenomenon by acquiring the pressure data and performing calculations quickly enough to adjust fuel injection, valve actuation, or other parameters for the next cycle based on the previous cycle’s measurements. Desired combustion conditions such as CA50 can be continuously attained on a research engine throughout its RPM range by employing next-cycle control. A combined research team of engineers from the NI Powertrain Controls Group and Argonne National Laboratory have proven next-cycle control’s functionality on a GM 1.9 L diesel engine. Figures 2 and 3 show the location in CAD of the amount of fuel burned inside a cylinder by mass with open-loop control and next-cycle control, respectively. CA50 is kept on target under all EGR conditions using next-cycle control (also see Table 1). Not only is 50 percent burn location kept on target, it is kept to the same target on all cylinders. 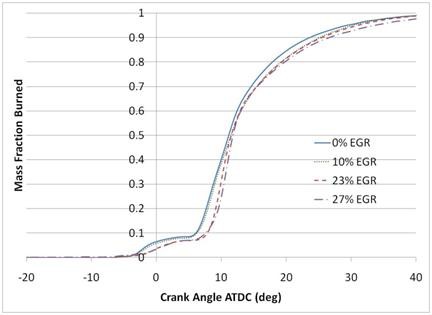 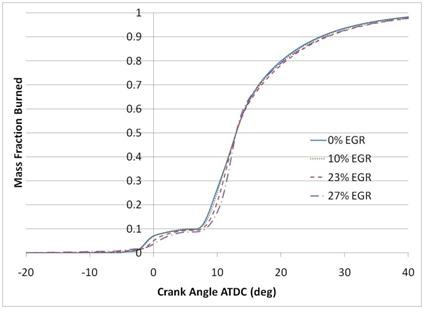 Many low-temperature, free piston, and other internal combustion engines are very sensitive to changes in temperature, pressure, and air flow. Any slight adjustment to these parameters can greatly influence the combustion event in the cylinder. Because next-cycle control does not rely on a preset calibration table for fuel and spark timing decisions, a researcher has the ability to adjust and observe certain parameters without having to worry about recalibrating a fuel map. For example, if a researcher wants to run an engine with CA50 occurring at 13.0 CAD, he has the freedom to adjust EGR and throttle position without having to worry about sudden engine shutdown or knock due to calibration limits. While precisely maintaining CA50, that researcher can sample exhaust O2 data and use that data in a proportional integral derivative (PID) loop to adjust fuel injection for optimal engine emissions without having previously created a lookup table for all possible operating conditions. This kind of flexibility is extremely valuable in research engines where the ability to finely tune and observe numerous variables without recalibration greatly increases research efficiency. With next-cycle control, researchers can spend more time studying combustion phenomena instead of creating calibration tables.

How Is Next-Cycle Control Achieved?

The R Series FPGA module and the NI Powertrain Control C Series modules are controlled with an embedded real-time PXI controller. The real-time OS on the embedded PXI controller deterministically runs a timed control loop that acquires the parameters sent from the R Series and simultaneous sampling S Series devices. These parameters, derived from NI CAS Software, are used to perform the calculations and decision making necessary to ensure next-cycle control. This deterministic timed loop guarantees that data is always available in time to adjust engine parameters for the next combustion cycle. Other parameters necessary to postprocess, analyze, record, and present results are collected outside the main control loop and streamed to disk, ensuring proper operation even under heavy processor load.

All of this hardware is programmed using the LabVIEW FPGA Module, which is software that converts the normal LabVIEW block diagram code into hardware description language (HDL) that controls the FPGA. The LabVIEW Real-Time Module, which features real-time OS (RTOS) software, is used to execute the code. The RTOS offers advantages over traditional OSs such as Windows by providing a stable platform that can deterministically execute critical code for extended amounts of time.

Using commercial off-the-shelf (COTS) hardware and software from National Instruments, engineers can build a complete engine control system that provides next-cycle control for internal combustion engines. Using LabVIEW FPGA and NI CAS Software, engineers and researchers can focus on control algorithms and system testing without being distracted by low-level I/O interface development. It is now possible to prototype a full-authority next-cycle control research-engine control system in a matter of days instead of months. Next-cycle control opens the way for controlling the combustion phasing of various engine research technologies by offering cycle-to-cycle control under a variety of conditions.