A protocol data unit (PDU) is a data unit that is defined in a cluster and exchanged within a frame. PDUs encapsulate network data and provide a way to communicate information between independent protocols, such as in a CAN-FlexRay gateway. You can think of a PDU as a container of signals. A single container (PDU) can be transmitted in multiple frames, and a single frame can contain multiple PDUs.

A frame can contain any number of non-overlapping PDUs. A frame can have multiple PDUs, and the same PDU can exist in different frames. The following figure shows the one-to-n (one PDU in n number of frames) and n-to-one (n number of PDUs in one frame) relationships. 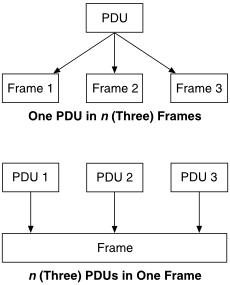 Currently only FlexRay interface devices support the practice of packing multiple PDUs into a single frame. The CAN and LIN protocols support only a 1:1 relationship between PDUs and frames.

Like a frame, a PDU contains an arbitrary number of signals. A PDU acts like a container for a logical group of signals. The following figure represents the relationship between frames, PDUs, and signals.

PDU properties provide such information as the position of the PDU in a frame, size, signals within the PDU, and so on. Three such properties are Start Bit, Payload Length, and Update Bit.

The Start Bit of a PDU within the frame indicates where in the frame the particular PDU data starts.

Payload Length defines the size of the PDU in bytes.

The receiver uses the Update Bit to determine whether the frame sender has updated data in a particular PDU. Update bits allow for the decoupling of a signal update from a frame occurrence. Update But is an optional PDU property.

Because the same PDU can exist in multiple frames, PDUs can have flexible transmission schedules. For example, in the following diagram, the first PDU is transmitted in Frame 1 (Timing 1) as well as in Frame 2 (Timing 2); the receiving node receives the PDU according to the different timings of the containing frames.