The sample rate, specified in samples per second (S/s), is the rate at which a signal is sampled and digitized by an analog-to-digital converter (ADC). According to the Nyquist theorem, a sample rate at least twice the highest frequency of the signal produces accurate measurements if the analog bandwidth is wide enough to let the signal pass through without attenuation. A higher sample rate captures more waveform details for the time domain measurements.

The following figure illustrates a 1 MHz sine wave sampled by a 2 MS/s ADC and a 20 MS/s ADC. The faster ADC digitizes 20 points per cycle of the input signal compared with 2 points per cycle with the slower ADC. In this example, the higher sample rate more accurately captures the waveform shape. 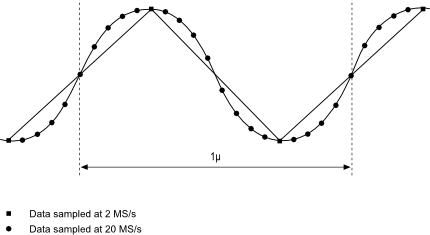 By oversampling, the maximum sample rate can be increased to 400 MS/s. This requires a repetitive signal and a stable trigger configuration. Using this method, multiple consecutive acquisitions are combined in the background, based on the phase of each capture.