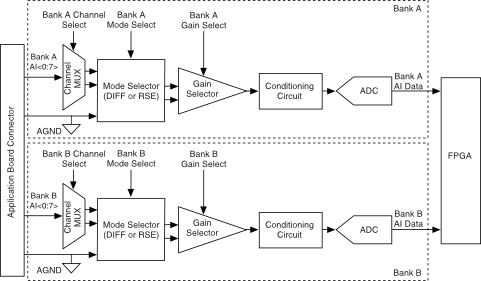 The NI ELVIS III provides eight differential (or 16 single-ended) high-impedance analog input channels on the NI ELVIS III Prototyping Board. These inputs are divided into two identical banks (Bank A and Bank B) to enable simultaneous processing in the FPGA. Each of the banks consists of a channel multiplexer (MUX), mode selector, gain selector, conditioning circuit, and ADC. For applications that use multiple channels, each of the selected channels are scanned into the ADC using the MUX.

The gain selector enables the user to select the input range of ±10 V, ±5 V, ±2 V, and ±1 V for the analog input operation. It is important to select a suitable input range that is larger but close to the peak-to-peak amplitude of the analog signal to be measured. This ensures that the maximum resolution of the ADC is utilized for better readout accuracy. The NI ELVIS III can sample channels in any order of the input range at the maximum conversion rate or lower. Each channel in a scan list can be individually programmed with a different input range.

The NI ELVIS III uses an analog-to-digital converter (ADC) to convert the AI signal into a 16-bit digital number.

The FPGA processes the digital number which represents the analog signal read by analog input circuitry. The NI ELVIS III can perform both single and multiple analog to digital conversions for a fixed or infinite number of samples. The first-in-first-out buffer inside the FPGA can be implemented to hold the digital numbers during analog input acquisitions to ensure no data is lost.