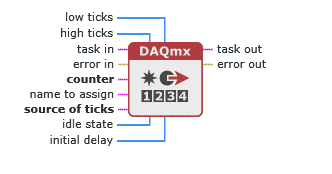 counter specifies the names of the counters to use to create the virtual channels. The DAQmx physical channel constant lists all physical channels, including counters, for devices installed in the system.

You also can wire a string that contains a list, or range of counters, to this input. If you have an array of counters, use the DAQmx Flatten Channel String node to convert the array to a list.

source of ticks is the terminal to which you connect an external timebase. A DAQmx terminal constant lists all terminals available on devices installed in the system. You also can specify a source terminal by wiring a string that contains a terminal name.

high ticks is the number of ticks the pulse is high.

low ticks is the number of ticks the pulse is low.

idle state specifies the resting state of the output terminal.

initial delay is the number of timebase ticks to wait before generating the first pulse.