If you use the finite impulse response pulse-shaping filters in modulation nodes, it may lead to the apparent loss of bits caused by filter delay. Refer to Filter Delay in the Details for more information about this effect. Set the flush buffers? parameter to TRUE to offset the effects of filter delay in single-shot operations or in the last iteration of continuous operations.

The sequence of information bits to be modulated.

For FSK systems with more than 1 bit per symbol, such as 4-FSK, the symbols are converted to bits in least significant bit (LSB) first order. For example, if the detected symbols are 2,1,... the generated bits are 0,1,1,0...

An ordered array that maps each Boolean symbol to its desired deviation frequency. The number of FSK levels in the array is 2 N , where N is the number of bits per symbol.

Continuity of phase transitions between symbols.

A Boolean that determines whether samples are forced out from the modulated waveform that are affected by the FIR pulse-shaping filter delay. Set this parameter to TRUE during single-shot operations and during the last iteration of continuous operations.

The array of mapped symbols before pulse shaping is applied. The real portion corresponds to the carrier frequency offset of the mapped symbol, and the imaginary portion is zero.

Fm is symbol bandwidth and is given by , where R is the symbol rate and is the filter parameter.

Fd is the maximum frequency deviation and is given by , where h i is the modulation index for the ith baud.

The sample rate of the signal is given by fs = samples per symbol * R.

A value of fs that is less than BW causes aliasing. The signal can be checked for aliasing by observing its spectrum and noting whether the observed bandwidth of the signal is higher than the calculated bandwidth.

You can prevent your signal from aliasing by using one of the following strategies: 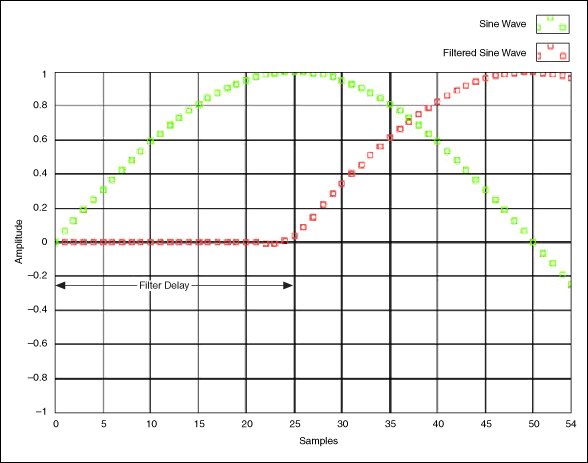