Every FPGA has a set number of programmable logic, routing, I/O, and memory resources. The compiler uses these resources to implement code on the FPGA.

The programmable resources on an FPGA are located at regular intervals across the chip, which allows for short paths between the resources. Short paths between resources reduce the minimum execution time that code running on the FPGA target requires. Since there are multiple instances of each resource on an FPGA, multiple concurrent processes can run on the same device at the same time, while minimizing resource conflicts. The following illustration shows a simplified example of programmable resources on an FPGA. 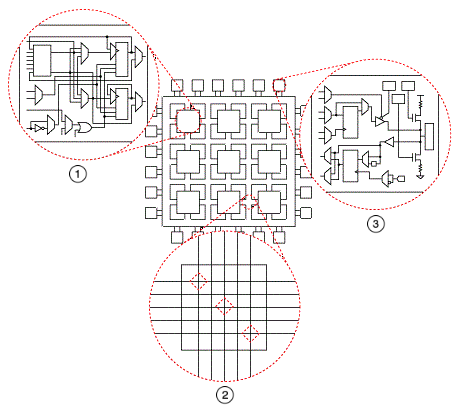 The compiler uses different combinations of available FPGA resources to implement the same code depending on the performance directives you set in your code and the resources available on your FPGA.