Factors like inefficient memory use, poorly designed panels, and too many I/O calls can negatively affect the execution speed of your VI. However, there are several strategies you can use to ensure that your VI runs more efficiently.

The more you allocate, deallocate, or move data in memory, the more memory the VI uses. Memory can also indirectly affect execution speed because allocating more space in memory leaves less memory for other operations, causing them to slow down if they reach the memory's capacity.

When creating a VI, consider the following guidelines:

Avoid the following, which can create additional and unnecessary copies of data:

I/O calls can incur a significant amount of overhead and take more time than a computational operation because I/O calls have to wait on external resources. You can improve VI execution speed by using various strategies to troubleshoot or optimize I/O calls.

The following example diagram shows an inefficiently structured loop. The loop is inefficient because the I/O functions within the loop run multiple times unnecessarily and are structured to write a small amount of data each iteration.

When troubleshooting or optimizing your I/O calls, examine the following items to ensure your loop runs efficiently:

The following example diagram shows the loop restructured for efficiency:

Optimizing your panel can improve the execution speed of your VI. Design and configure your panel according to the following guidelines:

When multiple loops run in parallel, the VI switches between them periodically. Parallel loops can help decrease execution time by simultaneously running independent tasks within individual loops. In the following example diagram, a single loop contains multiple independent tasks. This loop is inefficient because execution speeds can vary due to the lack of loop timing. In this example, the DAQ operation must wait for the slower I/O function and a status check to complete each iteration. 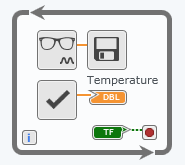 Since all parallel loops share the same processor resources, consider the following practices to make sure other loops do not interrupt the timing or execution of your important tasks:

The following is an example of a recreated VI using the considerations: 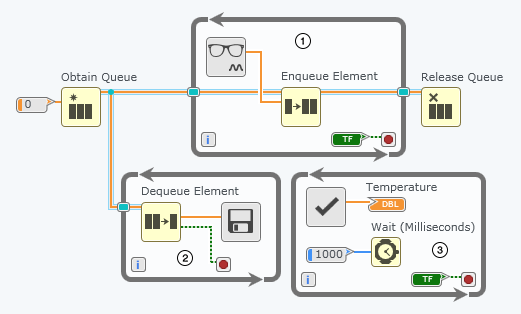