The PCI-8511/2 is a low-speed/fault-tolerant controller area network (CAN) PCI interface for developing CAN applications in NI LabVIEW, NI LabWindows/CVI, and C/C++ on Windows and LabVIEW Real-Time operating systems. As part of the NI-XNET platform, the PCI-8511/2 works well for applications that require real-time, high-speed manipulation of hundreds of CAN frames and signals, such as hardware-in-the-loop simulation, rapid control prototyping, bus monitoring, automation control, and more. 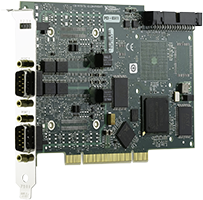 Search other manuals on ni.com