The following figure shows how to position strain gage resistors in a bending configuration for the half-bridge type II. 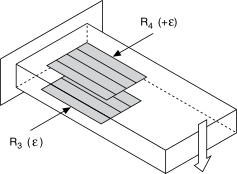 where Vr is the voltage ratio that virtual channels use in the voltage-to-strain conversion equation, GF is the gage factor, RL is the lead resistance, and Rg is the nominal gage resistance.