A microphone is a transducer that converts acoustical waves into electrical signals. The most common instrumentation microphone, a condenser microphone, uses a capacitive sensing element.

A condenser microphone incorporates a stretched metal diaphragm that forms one plate of a capacitor. A metal disk placed close to the diaphragm acts as a backplate. When a sound field excites the diaphragm, the capacitance between the two plates varies according to the variation in the sound pressure. A stable DC voltage is applied to the plates through a high resistance to keep electrical charges on the plate. The change in the capacitance generates an AC output proportional to the sound pressure. The following figure shows a condenser microphone. 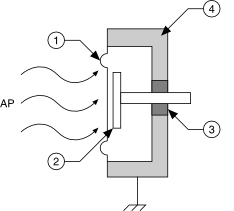 The major characteristics of a microphone are its sensitivity, usually expressed in mV/Pa, and its frequency response. Microphones are available in different diameters. Common diameters include: 1/8 in., 1/4 in., 1/2 in., and 1 in. Each diameter offers a specific compromise in terms of sensitivity and frequency response.

To reduce errors when using a microphone, keep several factors in mind: