Dataflow between Duplicates of the Same Terminal

Terminals are duplicates of one another if they have the exact same label. You can duplicate a terminal by right-clicking the terminal and selecting Create Duplicate Terminal. Copying and pasting a terminal does not create a duplicated terminal.

Duplicated terminals serve the same purpose as local variables in other programming languages.

In the following example, the String indicator displays a different message depending on which While Loop is executing. This example also uses a duplicate of the Run button to control the execution of both While Loops. 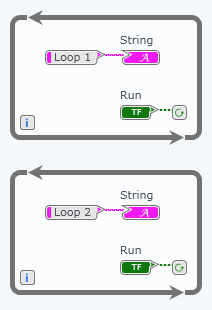