Fixed-point is a rational numeric data type whose range and precision you define by configuring the number of stored bits and the value assigned to those bits. Fixed-point numbers are important for implementing FPGA programs because many FPGAs do not efficiently support floating-point data types and because fixed-point numbers allow you to use the minimum number of bits to achieve the range and precision required by your algorithm. 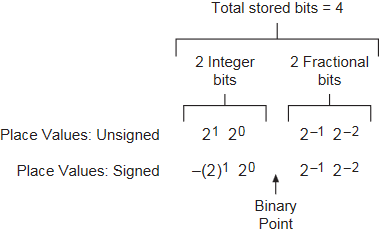 Understanding the Range and Precision of a Fixed-Point Number

Consider a 2-bit unsigned fixed-point number that stores two integer bits and zero fractional bits. Because each stored bit can hold either a 0 or 1, the 2-bit number can represent four unique combinations: 00, 01, 10, or 11. The place value of the left bit in this example is 21 and the place value of the right bit is 20. The following table shows the decimal value of each possible bit combination for the 2-bit unsigned fixed-point number in this example.